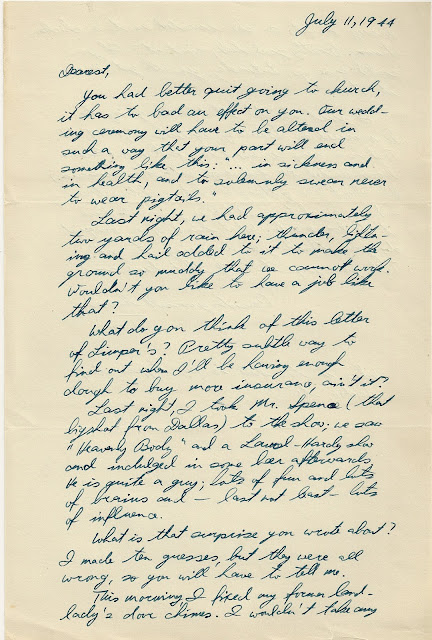 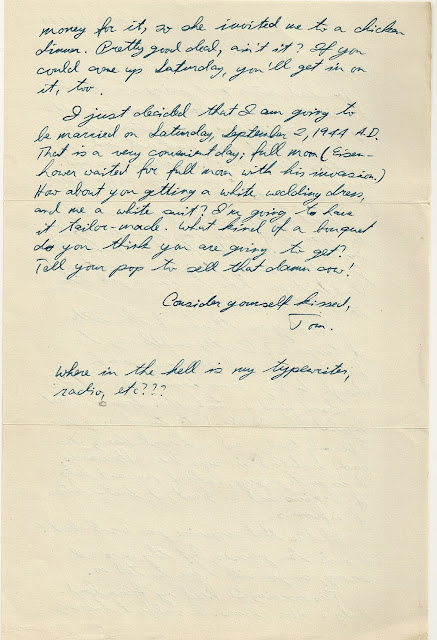 Letter from Opa to Grandmother
Transcription:
July 11, 1944
Dearest,
You had better quit going to church, it has too bad an effect on you. Our wedding ceremony will have to be altered in such a way that your part will end something like this: "...in sickness and in health, and to solemnly swear never to wear pigtails."
Last night, we had approximately two yards of rain here; thunder, lightning, and hail added to it to make the ground so muddy that we cannot work. Wouldn't you like to have a job like that?
What do you think of this letter of Limper's? Pretty subtle way to find out when I'll be having enough dough to buy more insurance, ain't it?
Last night, I took Mr. Spence (that big shot from Dallas) to the show; we saw "Heavenly Body" and a Laurel-Hardy show and indulged in some beer afterwards. He is quite a guy; lots of fun and lots of brains and - last but not least - lots of influence.
What is that surprise you wrote about? I made ten guesses, but they were all wrong, so you will have to tell me.
This morning, I fixed my former land-lady's door chimes. I wouldn't take any money for it, so she invited me to chicken dinner. Pretty good deal, ain't it? If you could come up Saturday, you'll get in on it, too.
I just decided that I am going to be married on Saturday, September 2, 1944 A.D. That is a very convenient day; full moon (Eisenhower waited for full moon with his invasion.) How about you getting a white wedding dress, and me a white suit? I'm going to have it tailor-made. What kind of a bouquet do you think you are going to get? Tell your pop to sell that damn cow!
Consider yourself kissed,
Tom.
Where in the hell is my typewriter, radio, etc??
Opa is off work for another day, this time on account of rain. I was feeling bad for his overtime and long days, but I think that those long days average out with the days off because of mud or broken things.
Opa is smart enough to know the art of schmoozing, and took his big shot boss from Texas out on the town. He seems like he makes good first impressions, but of course this is all from his perspective. I wonder if he was as charming and friendly as I imagine. He made lots of friends and engaged in the community around him, so he must have been somewhat successful!
I love how Opa feels like a good-ol-boy except he's from Berlin. He's fixing some lady's door-chimes (in exchange for chicken), taking the boss to the pictures, and dreaming of a full moon wedding with his church-going Kansas farm girl. I wonder if he sometimes stops and thinks: "How did I get here?!"
Posted by Sarah Snow at Friday, October 16, 2020