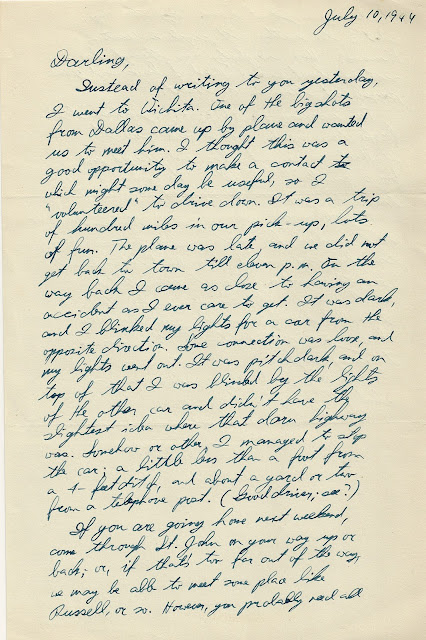 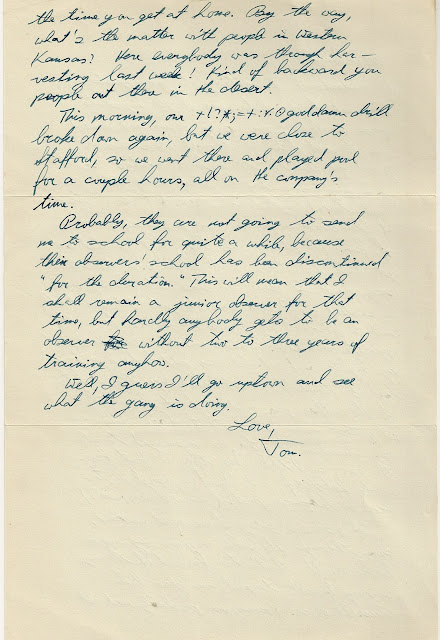 Letter from Opa to Grandmother
Transcription:
July 10, 1944
Darling,
Instead of writing to you yesterday, I went to Wichita. One of the big shots from Dallas came up by plane and wanted us to meet him. I thought this was a good opportunity to make a contact to which might some day be useful, so I "volunteered" to drive down. It was a trip of hundred miles in our pick-up, lots of fun. The plane was late, and we did not get back to town until eleven p.m. On the way back I came as close to having an accident as I ever care to get. It was dark, and I blinked my lights for a car from the opposite direction. Some connection was loose, and my lights went out. It was pitch dark, and on top of that I was blinded by the lights of the other car and didn't have the slightest idea where that darn highway was. Somehow or other, I managed to stop the car; a little less than a foot from a 4-feet ditch, and about a yard or two from a telephone post. (Good driver; see?)
If you are going home next weekend, come through St. John on your way up or back; or if that's too far out of the way, we may be able to meet some place like Russell, or so. However, you probably need all the time you get at home. By the way, what's the matter with people in Western Kansas? Here everybody was through harvesting last week! Kind of backward you people out there in the desert.
This morning, our +l?*;=+:vo goddamn drill broke down again, but we were close to Stafford, so we went there and played pool for a couple hours, all on the company's time.
Probably, they are not going to send me to school for quite a while, because their observers' school has been discontinued "for the duration." This will mean that I shall remain a junior observer for that time, but hardly anybody gets to be an observer without two to three years of training anyhow.
Well, I guess I'll go uptown and see what the gang is doing.
Love,
Tom.
So when we were growing up, we used to have a little running joke about Opa's driving. Basically: it was bad. We joked that he was used to driving on the autobahn so that's why he drove so fast and aggressively. Now I know that he learned to drive in the middle of nowhere Kansas, and the autobahn had nothing to do with it. I'm not sure who taught him to drive (the Shelley's?), but he did not fully learn. It doesn't help that he's always borrowing or using a less-than-stellar vehicle that's falling apart. It's a small miracle he was never in a major accident! (That I'm aware of anyway.)
His drill is broken again, and I can't figure out how anyone does their jobs in this company with things falling apart left and right.
Posted by Sarah Snow at Thursday, October 15, 2020