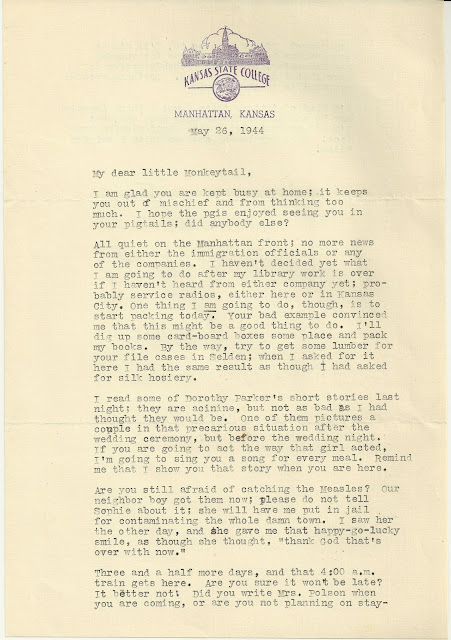 I am glad you are kept busy at home; it keeps you out of mischief and from thinking too much. I hope the pigs enjoyed seeing you in your pigtails; did anybody else?

All quiet on the Manhattan front; no more news from either the immigration officials or any of the companies. I haven't decided yet what I'm going to do after my library work is over if I haven't heard from either company yet; probably service radios, either here or in Kansas City. One thing I am going to do, though, is start packing today. Your bad example convinced me that this might be a good thing to do. I'll dig up some card-board boxes some place and pack my books. By the way, try to get some lumber for your file cases in Selden; when I asked for it here I had the same result as though I had asked for silk hosiery.

I read some of Dorothy Parker's short stories last night; they are asinine, but not as bad as I thought they would be. One of them pictures a couple in that precarious situation after the wedding ceremony, but before the wedding night. If you are going to act the way that girl acted, I'm going to sing you a song for every meal. Remind me that I show you that story when you are here.

Are you still afraid of catching the Measles? Our neighbor boy got them now; please do not tell Sophie about it; she will have me put in jail for contaminating the whole damn town. I saw her the other day, and she gave me that happy-go-lucky smile, as though she thought, "thank God that's over with now."

Three and a half more days, and that 4:00am train gets here. Are you sure it won't be late? It better not! Did you write Mrs. Polson when you are coming, or are you not planning on staying there? If you want me to, I'll dig up some dinner invitations for us for Tuesday and Wednesday, but we'll probably prefer to have that time for ourselves. Anything special you want to do those days?

I'm kind of jittery these days; I think invasion may be coming up this or next week end, but I'm not going to bet on it. Quit picking your face! Quit scratching them mosquito & chigger bites!

I keep being reminded of the strange ability we have as humans to hold the mundane and everyday life in one hand and the drama of the world in the other. D-day is around the corner, everyone knows it. It's just a matter of when and how successful it is. And yet, Opa is in Kansas, packing up and preparing to move on to his next thing after his library job is up. He's getting ready for a visit from Grandmother and reading short stories by Dorothy Parker.

I kind of agree with Opa, Dorothy Parker's short stories feel asinine, but I think that's her point. The wedding night story is a series of circular arguments between a newly wed couple who can't really believe they just got married and clearly have not learned how to communicate as a couple yet. They both take everything the other says in the worst way, and nit-pic and fight about it. When Opa said he would sing Grandmother a song if she acted that way, he was being funny because he wasn't a good singer.

I don't know how Opa isn't more nervous about his job prospects, but his optimism seems to be keeping him afloat. I don't know what happened between Opa and Sophie, but Sophie clearly does not like Opa, and he does not seem to like her. I wonder if there was some animosity towards Opa fro folks who were uncomfortable with his German-ness. At Kansas State, the college doesn't have quite the same investment and intimate knowledge of Opa that McPherson had. Opa is just another foreign student. At McPherson he was their foreign student that they rescued. Especially now that the United States is in the thick of the war, anti-German sentiment must be at an all-time high.

I wonder what Opa is feeling under those jitters about the coming invasion. Is he thinking of his family? I can't imagine he isn't. He ends by fussing at Grandmother not to pick her face. I'm sure it's a joke, and it reminds me of what his step-mother Emma would say to him. She said this to "help" him keep from getting acne. I don't think he loved it.

Jittery is about right when there's a chance that the war will shift in such a way that could change everything, and potentially give him news about his family. Good or bad.
Posted by Sarah Snow at Monday, June 29, 2020