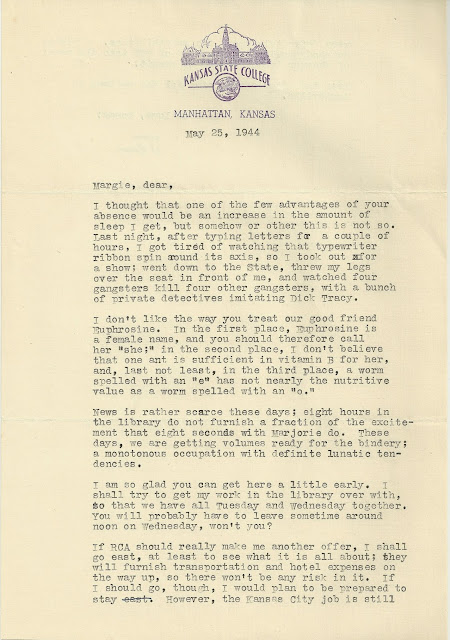 I thought that one of the few advantages of your absence would be an increase in the amount of sleep I get, but somehow or another, this is not so. Last night, after typing letters for a couple of hours, I got tired of watching that typewriter ribbon spin around its axis, so I took out for a show; went down to the State, threw my legs over the seat in front of me, and watched four gangsters kill four other gangsters, with a bunch of private detectives imitating Dick Tracy.

News is rather scarce these days; eight hours in the library do not furnish a fraction of the excitement that eight seconds with Marjorie do. These days, we are getting volumes ready for the bindery; a monotonous occupation with definite lunatic tendencies.

I am so glad you can get here a little early. I shall try to get my work in the library over with, so that we have all Tuesday and Wednesday together. You will probably have to leave sometime around noon on Wednesday, won't you?

If RCA should really make me another offer, I shall go east, at least to see what it is all about. They will furnish transportation and hotel expenses on the way up, so there won't be any risk in it. If I should go though, I would plan to be prepared to stay. However, the Kansas City job is still very definitely among the possibilities. I wish somebody would throw a pound of TNT into the pants of whoever is working on my permit. It's ten after seven, time for the mailman in Aggieville.

I have been looking back at older letters from 1940, and I know that he no longer has communication with most of the people he wrote then. He no longer even knows for certain who is alive. But yet, he still has many letters to write, the two hours he mentioned were probably to the INS and the places he applied for jobs.

I wonder if he's keeping up with friends from McPherson and the few folks he knows from his family connections in the US. Either way, he still writes away. I love his impression of the Western movie he saw- it sounds about like most western movies.

He still has the energy to tease Grandmother about the mouse he has named (I'm assuming it's a mouse).

He would much rather spend time with Grandmother than watch westerns or do tedious library work, but he has to keep at it so that he can get the job he needs!

I reminded myself that RCA and other companies that Opa was applying with for jobs, had much of their work involved in the war effort. That proved to be particularly tricky for Opa, as many companies either would not hire foreigners (as a policy), or had to go through a process of getting permission to hire one. Not only was Opa a foreigner, he was the worst type. What company would go out of their way to hire him?

This is a big bummer since Opa's skills and training (education) are in areas that are all pretty much tied up in the war effort right now. There was no avoiding it.

Opa remains optimistic, and notes that the RCA might throw him a bone and pay his way to the East Coast to check things out (maybe an interview?). Opa is ready to make it a move if he can. Was Grandmother ready to move with him? He didn't seem to make any mention of that, but he did say that the Kansas City job was still a possibility, so maybe that was his way of showing her he was trying to stay in Kansas.

I love the expression "throw a pound of TNT into the pants..." I'm going to use that some day.