April 1944, The Engineer: Here is the Explanation 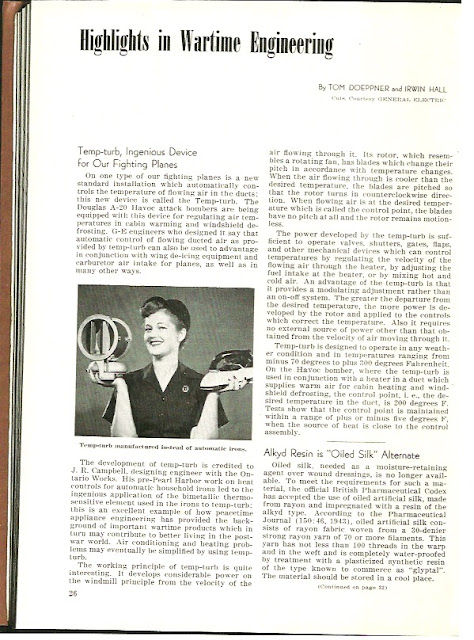 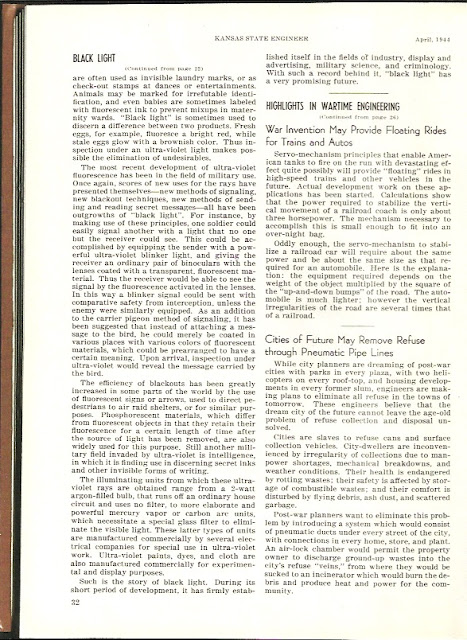 Article by Opa and Irwin Hall in The Engineer publication

by Tom Doeppner and Irwin Hall

On one type of our fighting planes is a new standard installation which automatically controls the temperature of flowing air in the ducts; this new device is called the Temp-turb. The Douglas A-20 Havoc attack bombers are being equipped with this device for regulating air temperatures in cabin arming and windshield defrosting. G-E engineers who designed it say that automatic control of flowing ducted air as provided by temp-turb can also be used to advantage in conjunction with wing de-icing equipment and carburetor air intake for planes, as well as in many other ways.

The development of temp-turb is credited to J.R. Campbell, designing engineer with the Ontario Works. His pre-Pearl Harbor work on heat controls for automatic household irons led to the ingenious application of the bimetallic thermo-sensitive element used in the the irons to temp-turb: this is an excelled example of how peacetime appliance engineering has provided the background of importance wartime products which in turn may contribute to better living in the post-war world. Air conditioning and heating problems may eventually be simplified by using temp-turb.

The working principal of temp-turb is quite interesting. It develops considerable power on the windmill principle from the velocity of the air flowing through it. Its rotor, which resembles a rotating fan, has blades which change their pitch in accordance with temperature changes. When their flowing through is cooler than the desired temperature, the blades are pitched so that the rotor turns in counterclockwise direction. When flowing air is at the desired temperature which is called the control point, the blades have no pitch at all and the rotor remains motionless.

The power developed by the temp-turb is sufficient to operate valves, shutters, gates, flaps, and other mechanical devices which can control temperatures by regulating the velocity of the flowing air through the heater, by adjusting the fuel intake at the heater, or by mixing hot and cold air. An advantage of the temp-turb is that it provides a modulating adjustment rather than an on-off system. The greater the departure from the desired temperature, the more power is developed by the rotor and applied to the controls which correct the temperature. Also it requires no external source of power other than that obtained from the velocity of air moving through it.

Temp-turb is designed to operate in any weather condition ad in temperatures ranging from minus 70 degrees to plus 300 degrees Fahrenheit. On the Havoc bomber, where the temp-turb is used in conjunction with a heater in a duct which supplies warm air for cabin heating and windshield defrosting, the control point, i.e. the desired temperature in the duct, is 200 degrees F. Tests show that the control point is maintained within a range of plus or minus five degrees F, when the source of heat is close to the control assembly.

Oiled silk needed as a moisture-retaining agent over wound dressings, is no longer available. To meet the requirements for such a material, the official British Pharmaceutical Codex has accepted the use of oiled artificial silk, made from rayon and impregnated with a resin of the alkyd type. According to the Pharmaceutical Journal (150:46, 1943), oiled artificial silk consists of rayon fabric woven from a 30-denier strong rayon yarn of 70 or more filaments. This yarn has not less than 100 threads in the warp and in the weft and is completely water-proofed by treatment with a plasticized synthetic resin of the type know to commerce as "glyptal". The material should be stored in a cool place.

War Invention May Provide Floating Rides for Trains and Autos

Servo-mechanism principles that enable American tanks to fire on the run with devastating effect quite possibly will provide "floating" rides is high-speed trains and other vehicles in the future. Actual development work on these applications has been started. Calculations show the the power required to stabilize the vertical movement of a railroad coach is small enough to fit into an over-night bag.

Oddly enough, the servo-mechanism to stabilize a railroad car will require about the same power and be about the same size as that required for an automobile. Here is the explanation: the equipment required depends on the weight of the object multiplied but the square of the "up-and-down bumps" of the road. The automobile is much lighter: however the vertical irregularities of the road are several times that of a railroad.

Cities of Future May Remove Refuse through Pneumatic Pipe Lines

While city planners are dreaming of post-war cities with parks in every plaza, with to helicopters on every rooftop, and housing developments in every former slum, engineers are making plans to eliminate all refuse in the towns of tomorrow. These engineers believe that the dream city of the future cannot leave the age-old problem of refuse collection and disposal unsolved.

Cities are slaves to refuse cans and surface collection vehicles. City-dwellers are inconvenienced by irregularity of collections due to man-power shortages, mechanical break downs, and weather conditions. Their health is endangered by rotting wastes; their safety is affected by storage of combustable waste; and their comfort is disturbed by flying debris, ash dust, and scattered garbage.

Post-war planners want to eliminate this problem by introducing a system which would consist of pneumatic ducts under every street of the city, with connections in every home, store, and plant. An air-lock chamber would permit the property owner to discharge ground-up wastes into the city's refuse "veins," from where they would be sucked to an incinerator which would burn the debris and produce heat and power for the community.

My two favorite parts of this article are in the last section: the scene of trash chaos, and the "here is the explanation" that is followed by a surprisingly clear explanation. I'll admit I was waiting for it to be really convoluted but it wasn't so bad.

The sweet dreams of engineers and Americans of what "post-war" life looks like is a little bittersweet for me. I'm not sure why they thought that the moment an armistice was signed that everything would magically be rainbows. It's like what parents do before their child is born, you make plans for your magical life and then the child is born, and the child makes the plans for you.

This article, and many at this moment in time (including the education conversations), are like the Pinterest board of America. They are hopeful, dreamy, and have high expectations for what life will hold in the future. They have no idea the obstacles that will come, the fails that will happen, but their optimism will most certainly help. That might be what is our best and worst feature as Americans- our naive optimism. It carries us through though.

PS- where the heck is my trash chute? That invention sounds awesome- why didn't it happen? I'm sure there's an explanation for that.