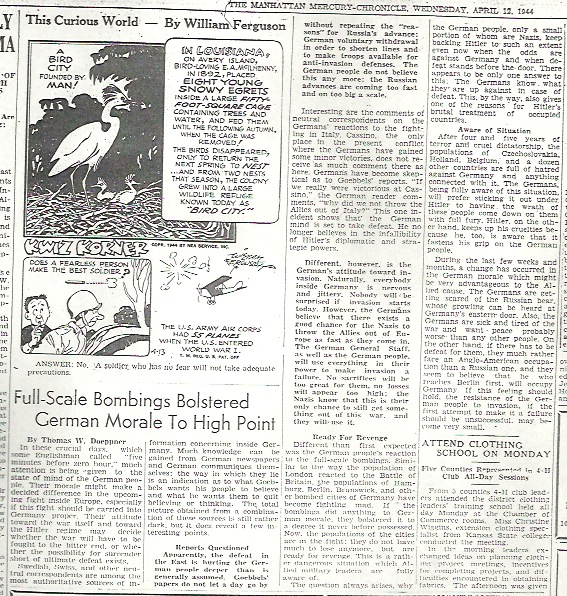 Article Written by Opa for the Manhattan, Kansas Newspaper: The Mercury Chronicle

In these crucial days, which some Englishman called "five minutes before zero hour," much attention is being given to the state of mind of the German people. Their morale might make a decided difference in the upcoming fight inside Europe, especially if this fight should be carried into Germany proper. Their attitude toward the Hitler regime may decide whether the war will have to be fought to the bitter end, or whether the possibility for surrender short of ultimate defeat exists.

Swedish, Swiss, and other neutral correspondents are among the most authoritative sources of information concerning inside Germany. Much knowledge can be gained from German newspapers and German communiques themselves: the way in which they lie is an indication as to what Goebbels wants his people to believe and what he wants them to quit believing or thinking. The total picture obtained from a combination of these sources is still rather dark, but it does reveal a few interesting points.

Apparently, the defeat in the east is hurting the German people deeper than is generally assumed. Goebbels' papers do not let a day go by without repeating the "reasons" for Russia's advance: German voluntary withdrawal in order to shorten lines and to make troops available for anti-invasion defenses. The German people do not believe this any more; the Russian advances are coming too fast and on too big a scale.

Interesting are the comments of neutral correspondents on the Germans' reactions to the fighting in Italy. Cassino, the only place in the present conflict where the Germans have gained minor victories, does not receive as much comment there as here. Germans have become skeptical as to Goebbels' reports. "If we really were victorious at Cassino," the German reader comments, "why did we not throw the Allies out of Italy?" This one incident shows that the German mind is set to take defeat. He no longer believes in the infallibility of Hitler's diplomatic and strategic powers.

Different, however, is the German's attitude toward invasion. Naturally, everybody inside Germany is nervous and jittery. Nobody will be surprised if invasion starts today. However, the Germans believe that there exists a good chance for the Nazis to throw the Allies out of Europe as fast as they come in. The German General Staff, as well as the German people, will use everything in their power to make invasion a failure. No sacrifices will be too great for them, no losses will appear too high: the Nazis know that this is their only chance to still get something out of this war, and they will use it.

Different than first expected was the German people's reaction in the full-scale bombings. Similar to the way the population of London reacted to the Battle of Britain, the population of Hamburg, Berlin, Brunswick, and other bombed cities of Germany have become fighting mad. If the bombings did anything to German morale, they bolstered it to a degree it never before possessed. Now, the populations of cities are in the fight: they do not have much to lose anymore, but are ready for revenge. This is a rather dangerous situation which Allied military leaders are fully aware of.

The question always arises, why the German people, only a small portion of whom are Nazis, keep backing Hitler to such an extent even now when the odds are against Germany and when defeat stands before the door. There appears to be only one answer to this: The Germans know what they are up against in case of defeat. This, by the way, also gives one of the reasons for Hitler's brutal treatment of occupied countries.

After four and five years of terror and cruel dictatorship, the populations of Czechoslovakia, Holland, Belgium, and a dozen other countries are full of hatred against Germany and anything connected with it. The Germans, being fully aware of this situation, will prefer sticking it out under Hitler to having the wrath of these people come down on them with full fury. Hitler, on the other hand, keeps up his cruelties because he too, is aware that it fastens his grip on the German people.

During the last few weeks and months, a change has occurred in the German morale which might be very advantageous to the Allied cause. The Germans are getting scared of the Russian bear, whose growling can be heard at Germany's eastern door. Also, the Germans are sick and tired of the war and want peace probably worse than any other people. On the other hand, if there has to be defeat for them, they much rather face and Anglo-American occupation than a Russian one, and they seem to believe that he who reaches Berlin first, will occupy Germany. If this feeling should hold, the resistance of the German people to invasion, if the first attempt to make it a failure should be unsuccessful, may become very small.

I believe we've been down this road before, but I reject the notion that Hitler was cruel to occupied nations so that the morale of fear would motivate his citizens and soldiers to stick out the fight. Hitler was cruel (and the rest of Nazi leadership) because he was a cruel person. He wasn't try to trick his people into being scared of vengeful Belgians. To say someone is cruel for political gain is missing the point that cruelty is more than just a choice, it's a mindset. Hitler and the Nazi leadership did not have the inclination to be kind and decide to be cruel for political benefit. This same argument could be used to make sense of the opposite action. If the Nazi government were kind and beneficial to their occupants- perhaps they would win them over? Perhaps there would not be a mass-effort for their freedom? It's not a solid argument either way, sorry Opa.

We start to see the war in motion in this article, the Russians on the East, the Allies still struggling in Italy and preparing for a massive invasion to the west.

I do agree with Opa's analysis that the Germans are more fearful of the Russians than the English or Americans. I think that goes for pretty much everyone at this point. I'm not sure if the race to Berlin was always a thing, or if suddenly the Russians locked eyes with the Brits and Americans and it was on. There definitely was some unspoken rule that the first one there had the most say in Germany's occupation. It seems a bit unfair since Berlin is all the way on the east side of the country. Either way, the race is on, and everyone (Germans included) is rooting against the "Russian Bear," at least in the long-run. In hindsight, it's really sad to know how this race to Berlin and division of Germany plays out.

Opa's final analysis is a little hazy, he sort of contradicts himself in this article. The Germans are fighting mad, and they are ready for the war to be over and prefer us over the Russians. I suppose he was calling out the phases of morale, like phases of grief for the Germans. They would fight to the bitter end out of fear and vengeance, but they also would get pretty tired and be ready to give up- to the Americans- when the time comes.

One last thought: Opa talks about his sources for this article (the German newspapers and statements from neutral countries), but he never specifically names any of them. I find this odd. I'm not sure if it's just sloppy journalism, or if it was a common practice to name things in general rather than say "the Washington Post said this..." No idea.