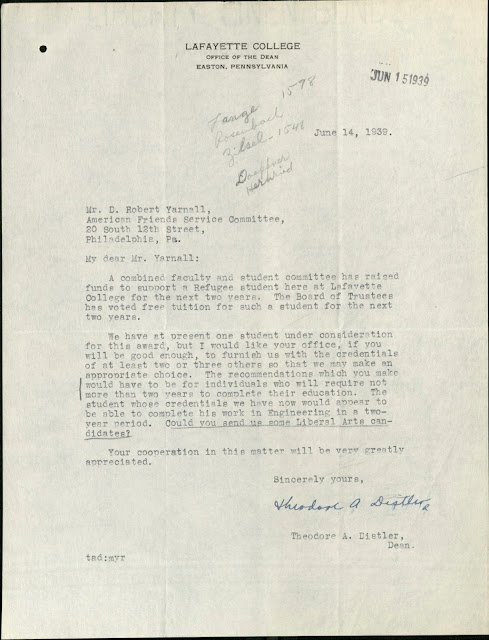 We have at present one student under consideration for this award, but I would like your office, if you will be good enough, to furnish us with the credentials of at least two or three others so that we may make an appropriate choice. The recommendations which you make would have to be for individuals who will require not more than two years to complete their education. The student whose credentials we have now would appear to be able to complete his work in Engineering in a two-year period. Could you send us some Liberal Arts candidates?

Your cooperation in this matter will be very greatly appreciated.

Mr. Robert Yarnall has referred to the refugee service your request for information about refugee students. We are very glad indeed to hear that the refugee committee at Lafayette has been so successful in its efforts to secure scholarships and funds for foreign students.
You may know that at present it is very difficult for young Germans to obtain student visas for the United States. Non-Jewish students are seldom allowed by the German government to leave the country, while students with any Jewish blood would not be allowed to return to Germany. For this reason the American consuls are reluctant to grant student visas which are supposed to be temporary. The net result is that it is practically impossible for any student to get out of Germany.
We are, however, acquainted with several students who have already arrived in the United States, and with others who have established a permanent residence in another country to which they could return after their school term here. The two young men who have the best records and who could, in all likelihood, get student visas both want to study engineering. I'll enclose the records of Thomas Doeppner and Rudolf Hernried, in case you should decide to take another engineering student. I am still trying to get more complete academic records for these boys, but it is particularly hard to get them since they had to leave Germany in a hurry and many of their former professors would be unwilling to get their records or else afraid to.
I'll also enclose some information about Paul Zilzel, an outstanding student highly recommended to us. He will arrive in the United States in the fall. However I believe that he is only ready to enter college and could not complete his work in two years. I am not sure about this. Probably the only way to determine his standing would be to give him some sort of examination after he arrived.
Please let me know if I can send you other information, or assist in any way.

I have to hand it to Charlotte Salmon of the American Friends Service Committee (AFSC). The moment I think she couldn’t be more diligent and helpful in Opa’s quest for acceptance into a university in the USA - she takes it a step further. Opa is on a high list for Oberlin College, and his name has been shared with several other schools, some we likely are unaware of, but Charlotte has not slowed down or considered anything a done deal. I’m guessing her experience has taught her that more possibilities are always better. She knocks on every door she finds.

Charlotte catches Mr. Distler up on the details of how it has become practically impossible for students to leave Germany. Her description gives us even more insight into the refugee crisis in Germany than we had before. You would think a student visa would be easier to get than waiting in the endless line for a regular visa, but Charlotte outlines the Catch-22 that is being a student in Germany:


Non-Jewish students are seldom allowed by the German government to leave the country, while students with any Jewish blood would not be allowed to return to Germany. For this reason the American consuls are reluctant to grant student visaes which are supposed to be temporary. The net result is that it is practically impossible for any student to get out of Germany.

I didn’t really think about non-Jewish students being unable to leave Germany before. But of course it makes some sense, Opa fled the country because he faced the Nazi draft. As a “mischling” (“half-Jew”) - he was good fodder for the front lines of battle. In a society that did not value higher education (the Nazis shortened the entire regular educational process by a year)- college students must have been less of an investment and more of a pool of fish for the army draft. Wouldn’t want them getting away, now would they?


Opa and some others were lucky to have gotten out of the country when they did, and now were seeking to take the next step forward to study in America. For students fleeing Hitler in Europe, this was especially dire, as the Nazis had made no secret of their desire to be a force in the world. European countries were preparing and watching for signs of attack and invasion as the months dragged on. No one knew exactly what Hitler’s plans were or that they were seriously in danger of being conquered, but I imagine anyone bordering Germany didn’t feel immune to the Nazi effect.

We get another glimpse into the nature of Opa’s situation in terms of getting his school records, and how he really was lucky to have his professor respond so willingly. Charlotte mentions that former professors may be “unwilling to get their records or else afraid to.”

At this point, Charlotte is continuing the struggle to keep open any options available to Opa. Which door will open all the way?
Posted by Sarah Snow at Monday, May 19, 2014