Book Review: "The Eyes of The Eternal Brother" by Stefan Zweig

One of the biggest leaps of faith I have to take in this journey is assuming that I can relate and understand the context in which the letters are written. I won't understand everything, but I can try to understand as much as possible. I contextualize each letter as best I can with research into the historical happenings, interviews with first-hand witnesses (both to the history and to my Opa’s experience of it), and in this particular instance- trying to recreate an experience myself. The next letter that I will share with you is from Opa to his friends Anni and Gisela. In the letter, he talks about some of their discussions they had while he was still participating in the Berlin Quaker group. One of those specific discussions that he mentions is the discussion around the book “The Eyes of the Eternal Brother” by Stefan Zweig. One of my husband’s brilliant ideas in this process was that any book, video, or publication that is mentioned in the letters- if I can get my hands on it and experience it myself - I should. This allows me at least a little insight into what the group was reading/watching. What were the little stitches in the cultural fabric that cloaked my Opa? 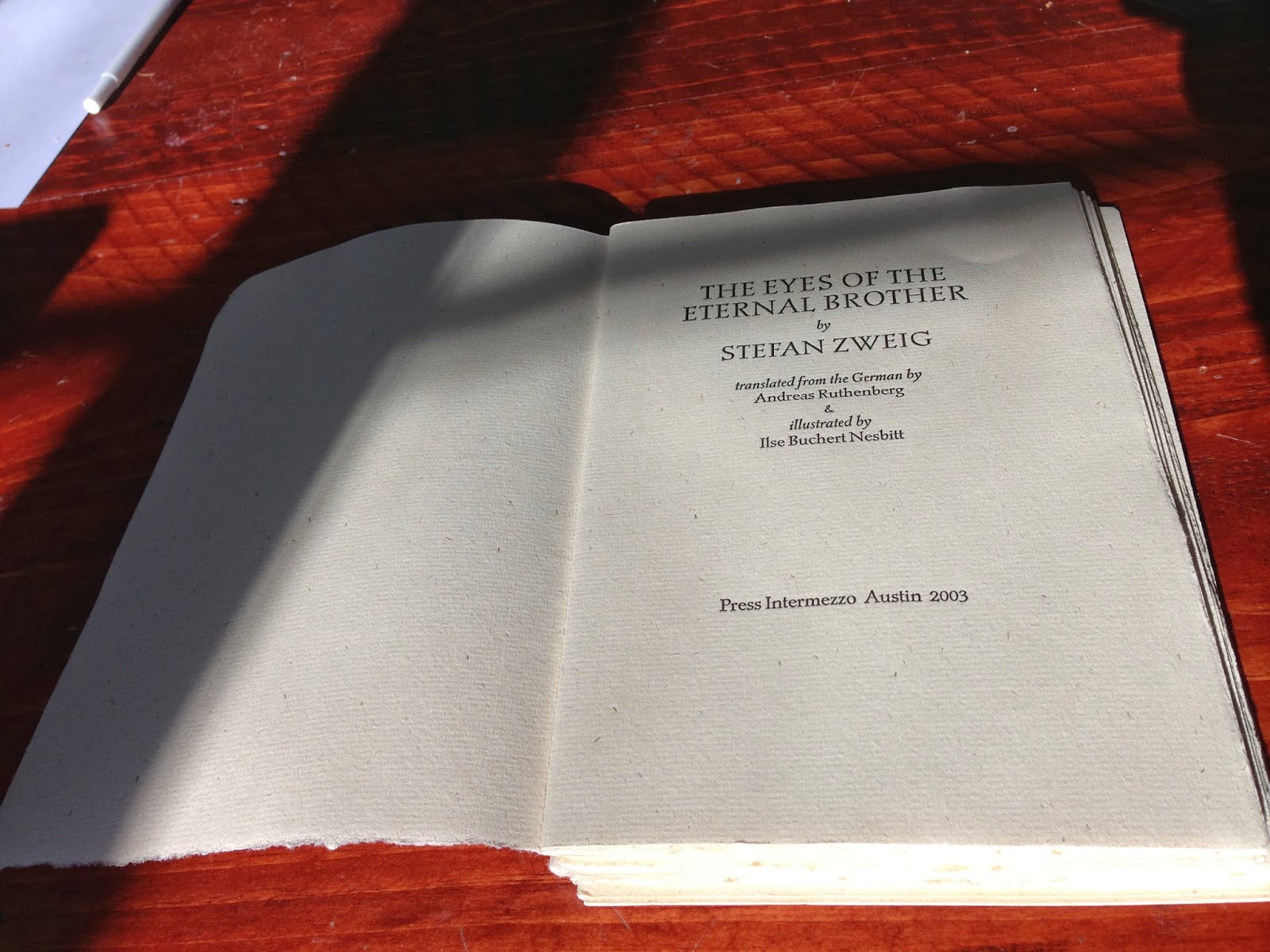 So I got my hands on Zweig’s book (a translation), and read it for myself. And like a good girl- I will give you my book review so you can at least have some idea of what my Opa is talking about in the letter. Enjoy!

The short story by Zweig has an Aesop fable feel to it. Combine Aesop with Hindu wisdom, and you have “The Eyes of the Eternal Brother.” The main character, Virata, is introduced as a man who was known by four names, but then was forgotten by everyone. The reader is introduced to Virata by each of his names- as a succession of experience and growing wisdom- he transforms himself through events that are marked by a vision of his first and life-changing trauma. The trauma is that he kills his brother in combat. He was known as the Sword of Lightning, a great warrior. In loyalty to his king, Virata leads a charge against rebels. He attacks at night and learns in the morning that he had unknowingly killed his brother. His brother’s dying eyes are imprinted into his soul, haunting him as he tries to deal with his grief and regret. 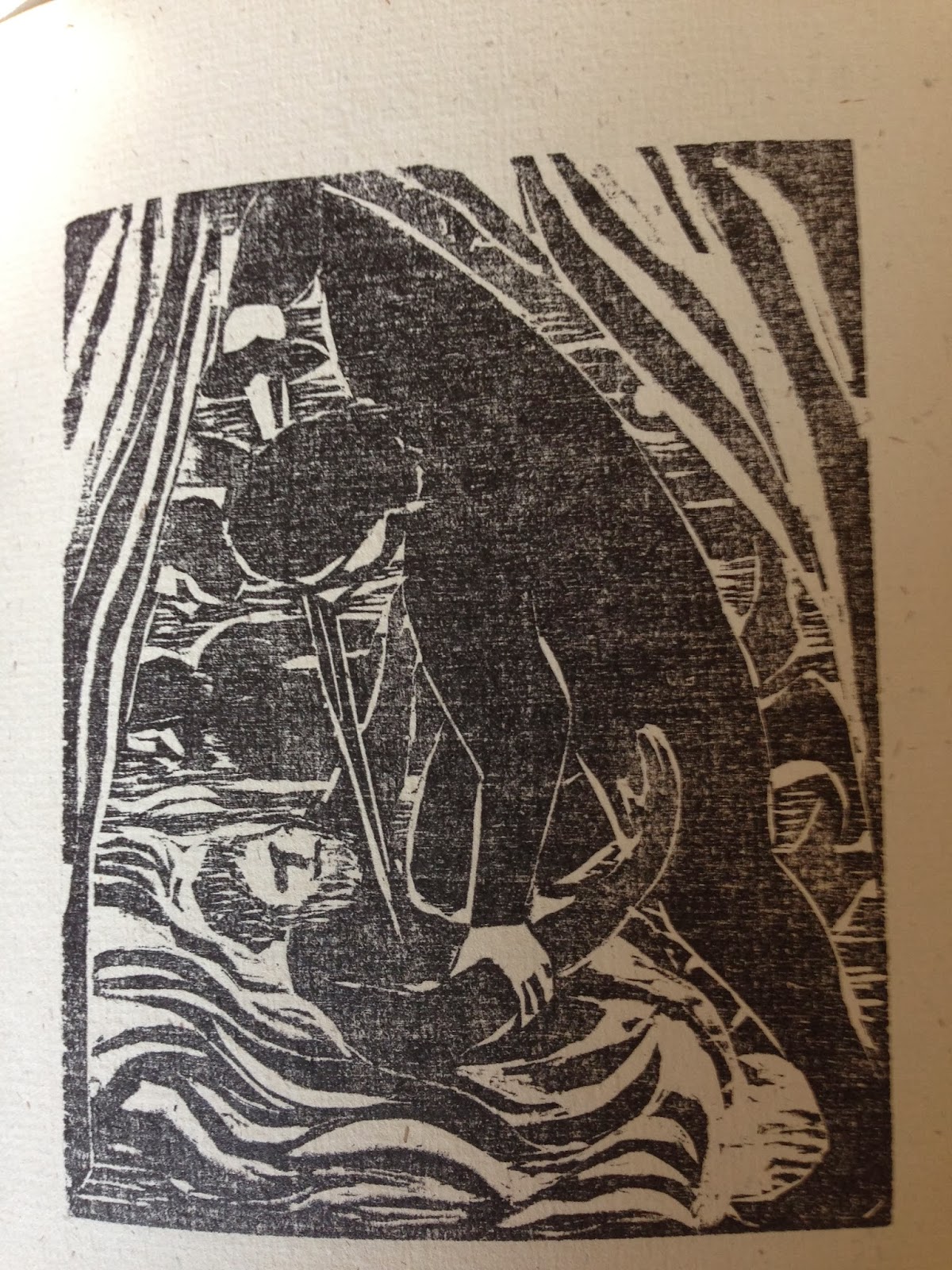 He is rewarded for protecting the kingdom, but he lays down his sword and vows to move forward and do better, live upright. He is given the job of judge and becomes the fairest and most respected judge. His new name: The Fountain of Justice. One day he finds a challenging case, when he sentences someone who allegedly murdered eleven people to eleven years in a prison that is underground in complete darkness.  For the first time, the prisoner fights him back and asks Virata how he could know if the punishment was just if he never experienced the punishment himself. As the angry man was carried away to prison, Virata sees his brother’s eyes in the angry eyes of the prisoner. He decides to secretly take the prisoner’s place for a month so that he can experience the punishment and judge more wisely. At first the darkness was calming and enlightening, but then he began to lose his mind. At the end of the month, the prisoner returns and Virata immediately releases all the prisoners. 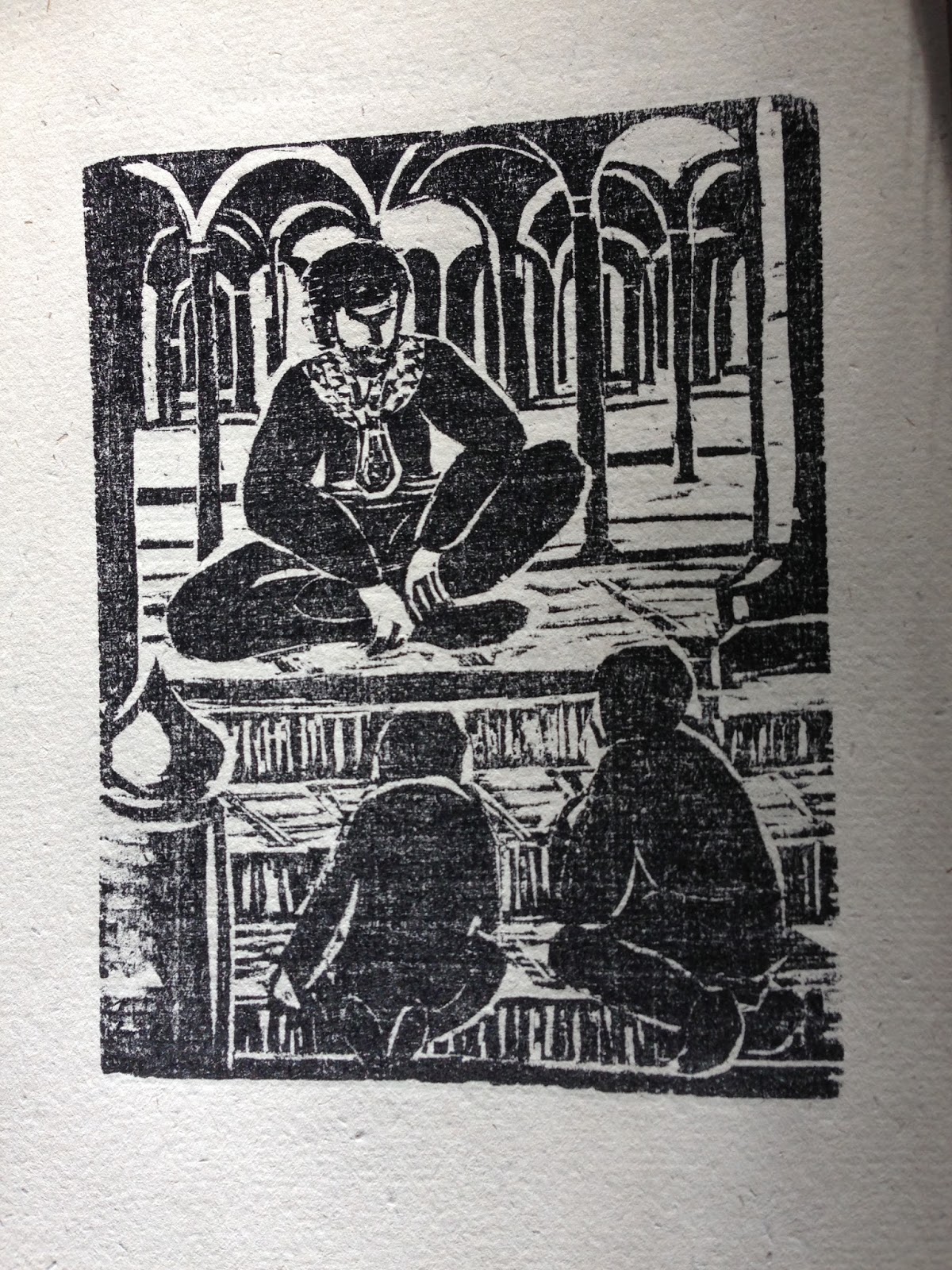 He is honored for his humility and wisdom, but Virata no longer wants to be a judge as he wants to be free of sin. So he goes home to live a peaceful life of meditation and holiness. He becomes known as the Field of Counsel. People flocked to this sage holy man for advice. After six years of peace, an incident happens when one of his slaves is abused by his sons in punishment for not obeying and working. Virata set the slave free, making a judgment and angering his sons. Once again he sees his brother’s eyes and decides that slavery is wrong and they should all be set free. The sons are angry at their father for upending the household order and way of life. Virata decides that to live the kind of life he was living means to depend on slave labor, and he cannot do that and live without sin, so he leaves to live alone and be self-sufficient. 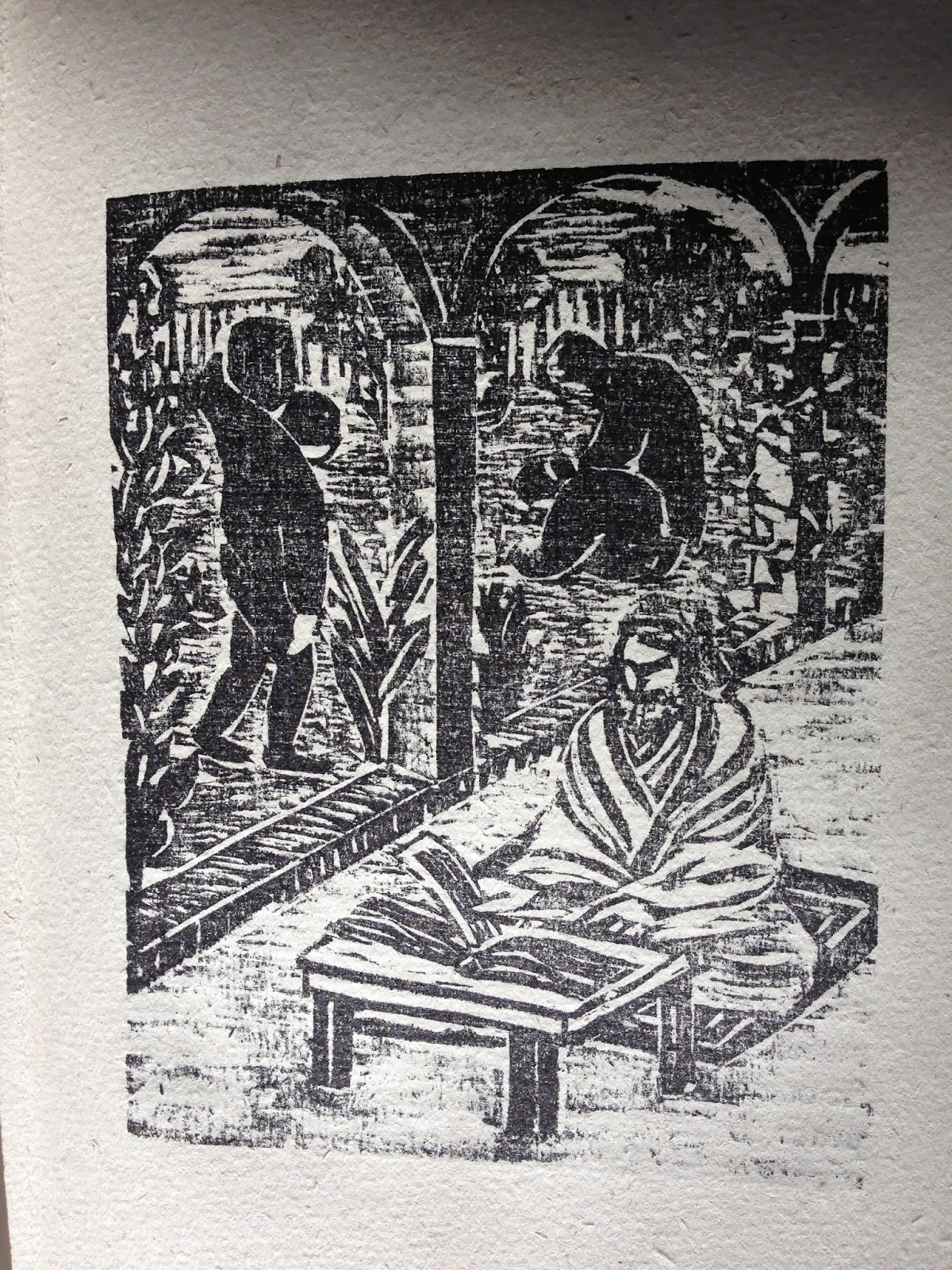 Virata then begins his life in solitude and becomes one with the earth and the animals. Someone spots him and sees how the animals are not afraid of him and how he is faithful in prayers and meditation. He becomes known as the Star of Solitude. People begin to follow in his example and live solitary lives of holiness. One day one of the men in solitude had died by natural causes, and so Virata took the body in to town to get help from the villagers in the burial ritual. He gets an angry look from one woman, and learns that her husband left her to live a life of solitude, and she was abandoned to care for her children and home alone. Her children starved to death because of the sudden poverty. Again, Virata sees his brother’s eyes and realizes his life of solitude was a cause for this woman’s grief. 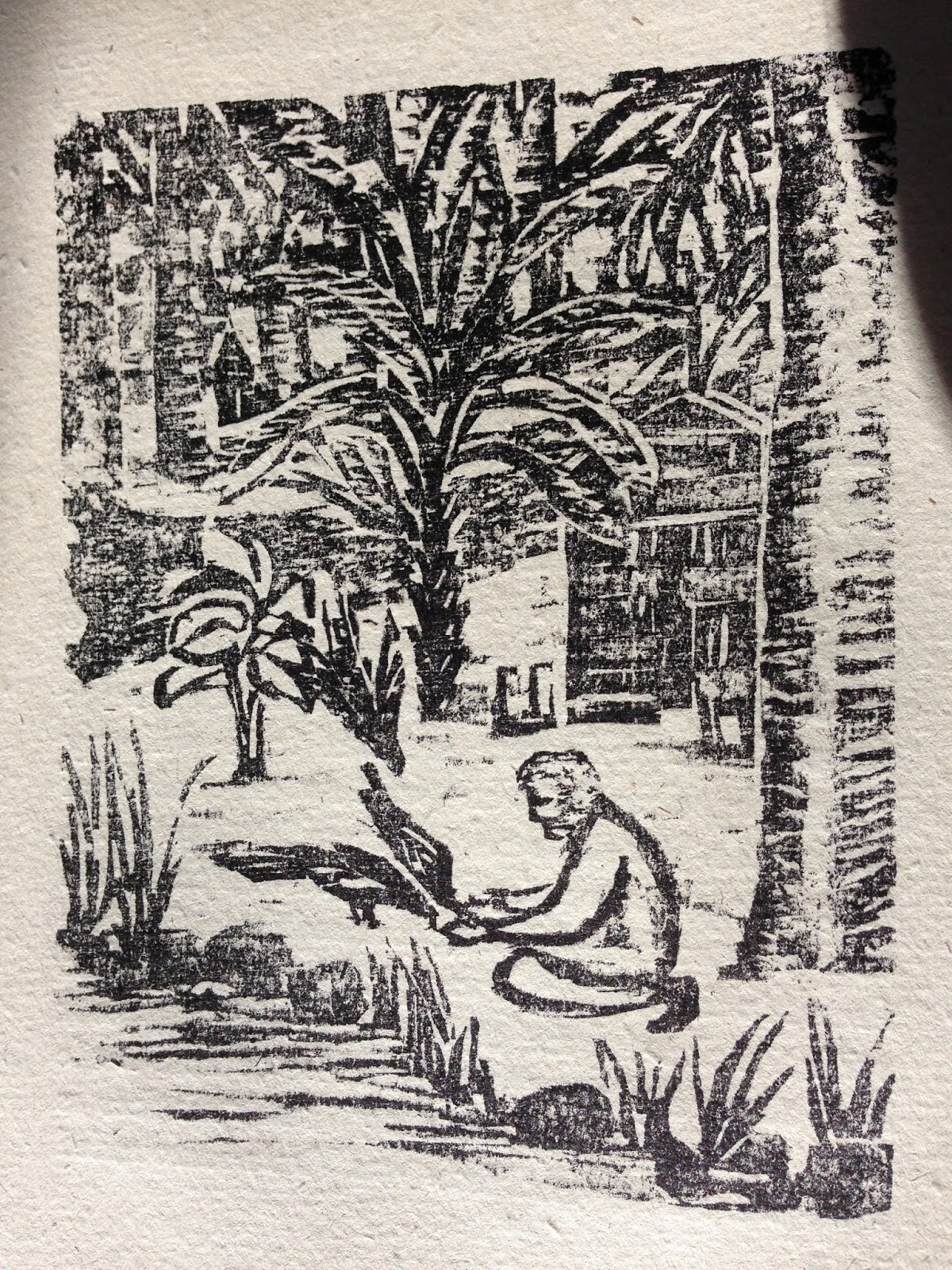 Lastly Virata becomes a servant to the king as a keeper of his dogs- the lowest service position. People forget about him and the dogs loved him, but also forgot about him after he died. 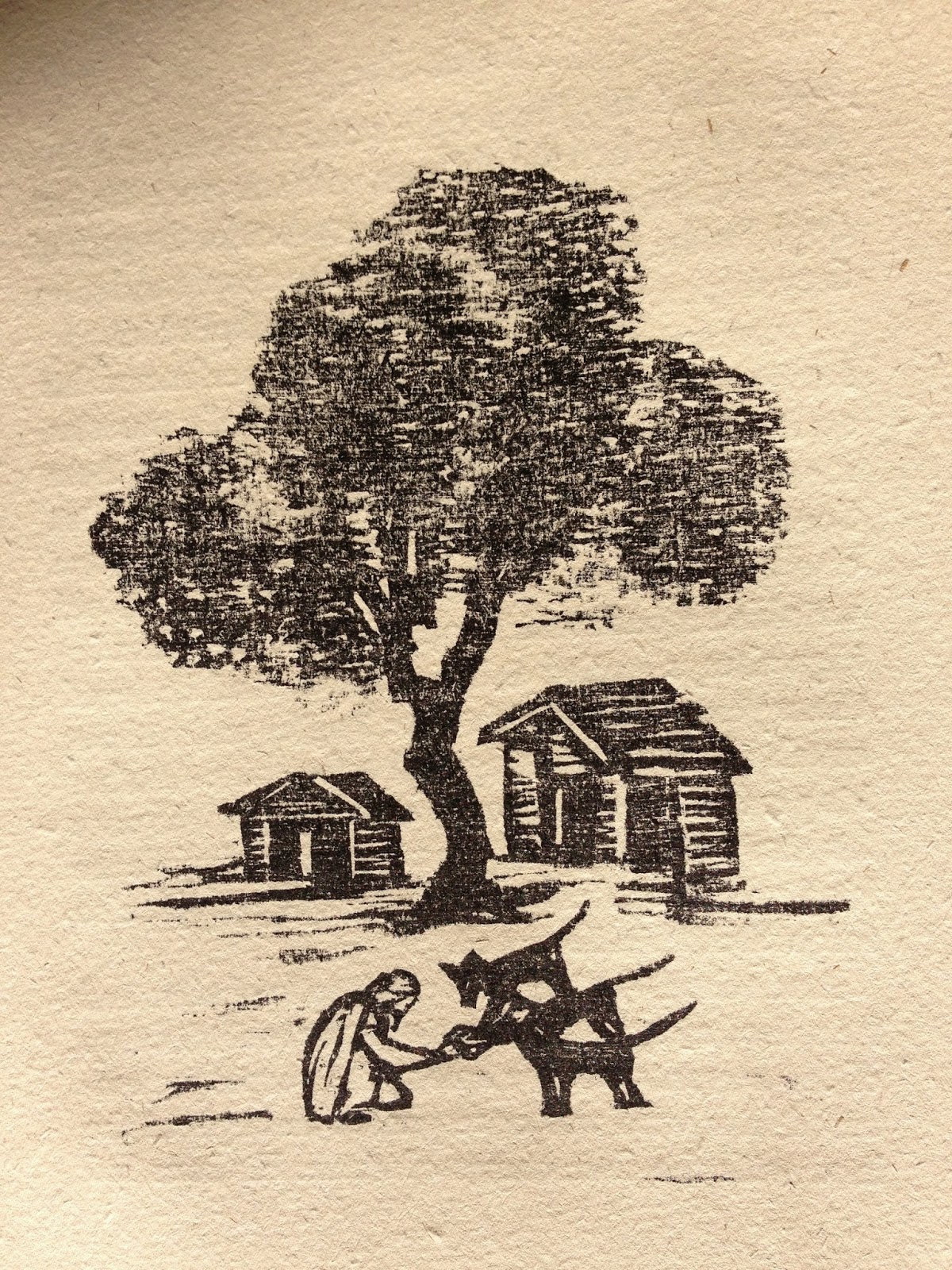 Virata tries to live a life that does not harm or hurt, a life that is aimed almost as a sacrifice of repentance for his brother’s life. Each new way that he tries, he finds himself hurting someone or something... and in that moment of someone’s pain- he sees his brother’s eyes. Each time he sees the haunting eyes, he makes a dramatic shift, learning with each lesson, and moves forward- hoping not to harm again. Ultimately with each extreme attempt, the man never really finds the final solution to living a clean, perfect life. He dies a servant to dogs, his happiest attempt.


It’s sort of depressing to watch the character try so hard to be authentically good and yet find gaping holes in his methods each time. If one were to read it with cynicism sitting on their shoulder, you’d surmise that all is a wash, nothing really matters, and to try is but a painful farce. In fact, when I did a little research on the author, Zweig may very well have had this idea. (Read up on him a little here). Zweig was born in Vienna, Austria to Jewish parents. Religion wasn’t a focus of his life, but he owned his Jewish identity. He was a popular writer in the 1920s-1930s. He migrated further and further from the epicenter of Hitler’s growing power, moving to Switzerland, then England, then at last to Brazil. He and his wife despaired of their beloved European home falling to hatred and war. They killed themselves in 1942, their solution to existing in a world that did not look as it should. Zweig was a pacifist who wished for European unification- and what he witnessed in his lifetime was the exact opposite.
It makes a lot of sense why the German Quaker group would read this work by this novelist. At the least, the author is a self-proclaimed pacifist who has progressive views on achieving peace in the world. He was a jewish author, whose books may not have been available in mainstream Germany- although I’m not 100% sure of that. Certainly he wasn’t being read in the schools… And last but not least- the author, as well as the story- was searching for a way to do right, be good, in the midst of a fallen world. The beginning of Zweig’s book includes these two quotes:

Not by avoiding every act are you truly freed from action,
You can never be entirely free from action,
not even for a moment.
-Bhagavad-Gita, 3rd Song

I think these quotes serve as a frame for Zweig’s story, as the character Virata illustrates this mental struggle between action and in-action in the pursuit of good. This struggle is at the heart of the pacifist thought. Quakers would want to make the point that pacifism is not simply a passive stay of power, but rather an active pursuit of peace by means other than violence. In Hitler’s Germany, inaction was certainly not without consequences, and this Quaker group would know this well. Starting the conversation of what it means to pursue the good and right thing through both action and inaction in Nazi Germany would have been extremely valuable.

I felt very sorry for the main character at first, and yet also sort of annoyed by his extremism. But then I panned back a little bit. The honor in the man was that he kept trying. He learned with each mistake and absorbed the wisdom of those around them, even if they might have been unworthy by the standards of other people- a prisoner, a slave, greedy sons... He had great humility. What he lacked was grace for himself... He had a narrow focus on eliminating sin, rather than focusing on multiplying love and goodness.

How could I apply this fable to my own life? How would the Quaker youth group in the 1930s apply it to theirs? Perhaps that everything we do or don’t do has consequences- some that are predictable, some that are out of left field. I personally reminded myself that although relationship with people often causes things in life to be messier, the relationships are the gold I’m after in this life… So better to risk the mess than to avoid it to keep my hands clean. This also works for social issues I might rather ignore or “do no harm” rather than take the next step in actively “doing good.” It might make a mess, but I’d rather run the risk of a mess than allow my inaction to enable the slaughtering of all that is good.
Posted by Sarah Snow at Friday, January 17, 2014