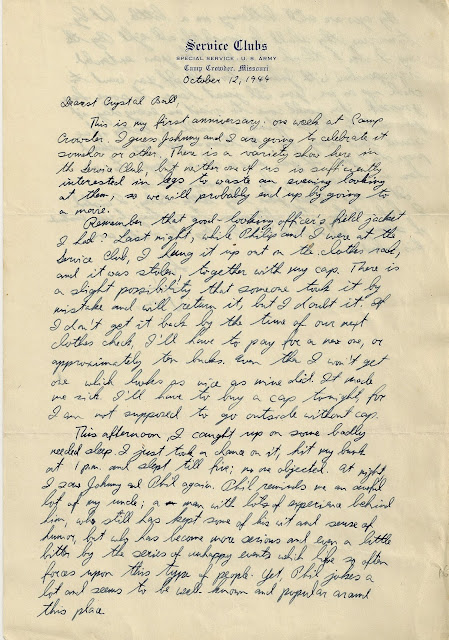 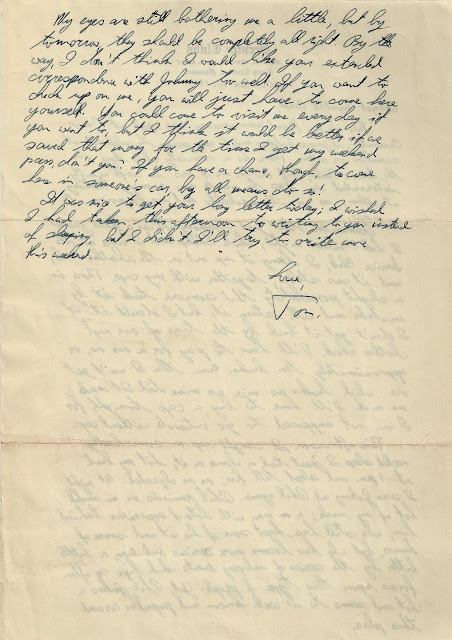 Letter from Opa to Grandmother, October 12, 1944.
Transcription:
October 12, 1944
Dearest Crystal Ball,
This is my first anniversary: one week at Camp Crowder. I guess Johnny and I are going to celebrate it somehow or other. There is a variety show here in the Service Club, but neither of us is sufficiently interested in legs to waste an evening looking at them, so we will probably end up by going to a movie.
Remember that good-looking officer's field jacket I had? Last night, while Philip and I were at the Service Club, I hung it up out on the clothes rack, and it was stolen, together with my cap. There is a slight possibility that someone took it by mistake and will return it, but I doubt it. If I don't get it back by the time of our next clothes check, I'll have to pay for a new one, or approximately ten bucks. Even then I won't get one which looks as nice as mine did. It made me sick. I'll have to buy a cap tonight, for I am not supposed to go outside without cap.
This afternoon, I caught up on one badly needed sleep. I just took a chance on it, hit my bunk at 1pm and slept till five; no one objected. At night I saw Johnny and Phil again. Phil reminds me an awful lot of my uncle; a man with lots of experience behind him, who still has kept some of his wit and sense of humor, but who has become more serious and even a little bitter by the series of unhappy events which life so often forces upon this type of people. Yet, Phil jokes a lot and seems to be well-known and popular around this place.
My eyes are still bothering me a little, but by tomorrow they should be completely all right. By the way, I don't think I would like your extended correspondence with Johnny too well. If you want to check up on me, you will just have too come here yourself. You could come to visit me every day if you want to, but I think it would be better if we saved that money for the time I get my weekend pass, don't you? If you have a chance, though, to come here in someone's car, by all means do so!
It was nice to get your long letter today; I wished I had taken this afternoon to writing to you instead of sleeping, but I didn't. I'll try to write more this weekend.
Love,
Tom.
Opa is most likely referring to his Uncle Kurt in this letter. Kurt is Ella's younger brother, the baby in that family. I'm guessing Philip had the same charm and laissez faire sense about life. Kurt was a bit of a ladies man, and I don't know if Philip was similar in that way or not.
Either way, Kurt had indeed suffered a lot of hardship by this time in his life. In 1944 (if I've got my dates right), he had just escaped a concentration camp and was working on a British ship as a cook. He had fathered two children in 1939 (with two different women) and sometime in the mid 1930s, his wife had disappeared to Russia with her family, never to be heard from again. She didn't leave him so much as she was forced to join her family, and they had to sever communication to protect him. It is assumed that they died in the gulags.
I'm not sure exactly what Philip's hardships were, or how exactly he reminded Opa of Kurt, but it sounds like he still had a charm and wit about him that endeared Opa to him.
I want to say I can't believe Opa's jacket was stolen, but if it looked good and the penalty for not having an item of clothing was at least $10, I can see a number of reasons why it would have been stolen. We have a sort of fairy-tale ideal of soldiers, but we forget that they are a normal bunch of humans who for many more reasons that just valor, decided to join the military. Like any group of people: they're not going to be perfect, no matter how you dress them.
Opa and Grandmother have been married almost a month, and they've barely seen each other. Opa is hoping for a weekend pass soon.
Posted by Sarah Snow at Monday, November 29, 2021