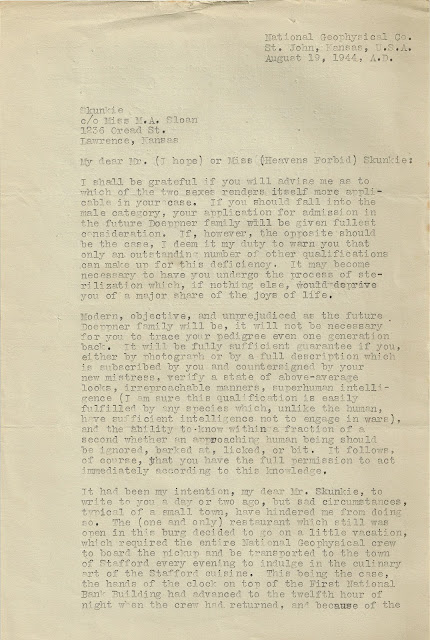 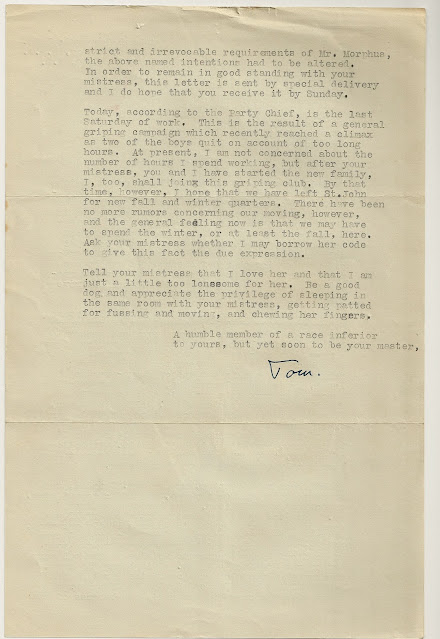 Letter from Opa to Grandmother, August 19, 1944.
Transcription:
National Geophysical Co.
St. John, Kansas, U.S.A
August 19, 1944, AD
Skunkie
c/o Miss M.A. Sloan
1236 Oread St.
Lawrence, Kansas
My dear Mr. (I hope) or Miss (Heavens Forbid) Skunkie:
I shall be grateful if you will advise me as to which of the two sexes renders itself more applicable in your case. If you should fall into the male category, your application for admission in the future Doeppner family will be given fullest consideration. If, however, the opposite should be the case, I deem it my duty to warn you that only an outstanding number of other qualifications can make up for this deficiency. It may become necessary to have you undergo the process of sterilization which, if nothing else, would deprive you of a major share of the joys of life.
Modern, objective, and unprejudiced as the future Doeppner family will be, it will not be necessary for you to trace your pedigree even one generation back. It will be fully sufficient guarantee if you, either by photograph or by a full description which is subscribed by you and countersigned by your new mistress, verify a state of above-average looks, irreproachable manners, superhuman intelligence (I am sure this qualification is easily fulfilled by any species which, unlike the human, have sufficient intelligence not to engage in wars), and the ability to know within a fraction of a second whether an approaching human being should be ignored, barked at, liked, or bit. It follows, of course, that you have the full permission to act immediately according to this knowledge.
It had been my intention, my dear Mr. Skunkie, to write to you a day or two ago, but sad circumstances, typical of a small town, have hindered me from doing so. The (one and only) restaurant which still was open in this burg decided to go on a little vacation, which required the entire National Geophysical crew to board the pickup and be transported to the town of Stafford every evening to indulge in the culinary art of the Stafford cuisine. This being the case, the hands of the clock on top of the First National Bank Building had advanced to the twelfth hour of night when the crew had returned, and because of the strict and irrevocable requirements of Mr. Morphus, the above named intentions had to be altered. In order to remain in good standing with your mistress, this letter is sent by special delivery and I do hope that you receive it by Sunday.
Today, according to the Part Chief, is the last Saturday of work. This is the result of a general griping campaign which recently reached a climax as two of the boys quit on account of too long hours. At present, I am not concerned about the number of hours I spend working, but after your mistress, you and I have started the new family, I, too, shall join this griping club. By that time, however, I hope that we have left St. John for new fall and winter quarters. There have been no more rumors concerning our moving, however, and the general feeling now is that we may have to spend the winter, or at least the fall, here. Ask your mistress whether I may borrow her code to give this fact the due expression.
Tell your mistress that I love her and that I am just a little too lonesome for her. Be a good dog and appreciate the privilege of sleeping in the same room with your mistress, getting patted for fussing and moving, and chewing her fingers.
A humble member of a race inferior to yours, but yet soon to be your master,
Tom.
Opa has decided to address the new family dog that Grandmother has obtained: Skunkie. I'm going to guess that the name is either reflective of the coloring or the scent. Let's hope it's the former. I may be both.
I love Opa's humor here, keeping in character for the whole letter, writing to the new dog and giving expectations for being a part of the family.
I was struck by some of the quips, and how closely related to Opa's own life experience they are. In an odd way, Opa is writing to skunkie almost as if he is writing to himself (or hoped the world would).
Skunkie does not need to provide pedigree. Opa's world not only required his pedigree, but did not approve of his: in Germany he was too Jewish, and now in America, he's still too Jewish AND too German. Skunkie won't need to worry about that.
Skunkie has already been named the wiser species as one who has "sufficient intelligence not to engage in wars." Opa wishes humans could be that smart.
Skunkie is also of great privilege, getting to lounge around and with Grandmother, the woman whom Opa is missing terribly.
Opa's company is making changes due to complaints (overworking), and I get the impression that Opa is just buying time until the next thing. He understands the complaints, but he's so dis-invested from the company that he doesn't even try to make an effort to transform it. He's grumbling about staying in St. John (things still aren't right), and he just wants to move on (with Grandmother).
I don't think I have any pictures of Skunkie, wish I did! But good to know that dogs have been held in high-regard by the Doeppner family.
Posted by Sarah Snow at Wednesday, March 24, 2021