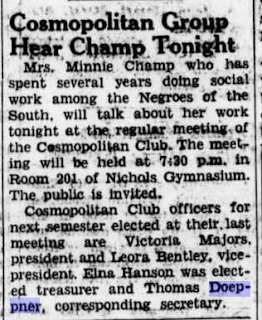 Mrs. Minnie Champ who has spent several years doing social work among the Negroes of the South, will talk about her work tonight at the regular meeting of the Cosmopolitan Club. The meeting will be held at 7:30pm, in Room 201 of Nichols Gymnasium. The public is invited.

Opa continues to be greatly involved in campus life, with speaking engagements and officer roles. He led a remarkably active life in college, it blows my lazy college days out of the water!

I noted a couple of things from these short announcements. First, Opa was never particularly religious. Despite the fact that he was the head usher of a Methodist Church for many years, even I understood as a kid that he was involved more as a civic duty than a religious one. Or maybe I was wrong. I've learned from Opa's earlier letters and discussions with Gisela, that he was very thoughtful and had a spiritually inquisitive mind. Maybe it was more philosophical than spiritual, but he was curious. So although it still strikes me as odd that he would be a speaker for a Lutheran group, I wonder if perhaps Opa never stopped being curious about religion. Perhaps he was just never quite convinced to jump all the way in.

The second thing I noted was the topic of the talk in Opa's Cosmopolitan Group. I love this group, it feels like the cool kids group (or maybe just the opposite), but they dared to learn about taboo topics. What did this woman talk about? Disenfranchisement? Segregation? Reparations? Systemic Racism? Who knows what level of understanding she had about the people she worked with, or the goals she had in working with them. I would be so fascinated to have heard that talk; to hear the perspective of a woman speaking with midwestern folks and a sprinkling of foreign students about a huge issue about which they had no idea or experience.

It stops me in my tracks a little. With the war raging on, everyone is hyper-focused on the drama overseas, completely unaware of the persistent tragedy in their back yard. It's a lesson that if you do not appropriately address a problem, it will not disappear, even if another problem overshadows it.