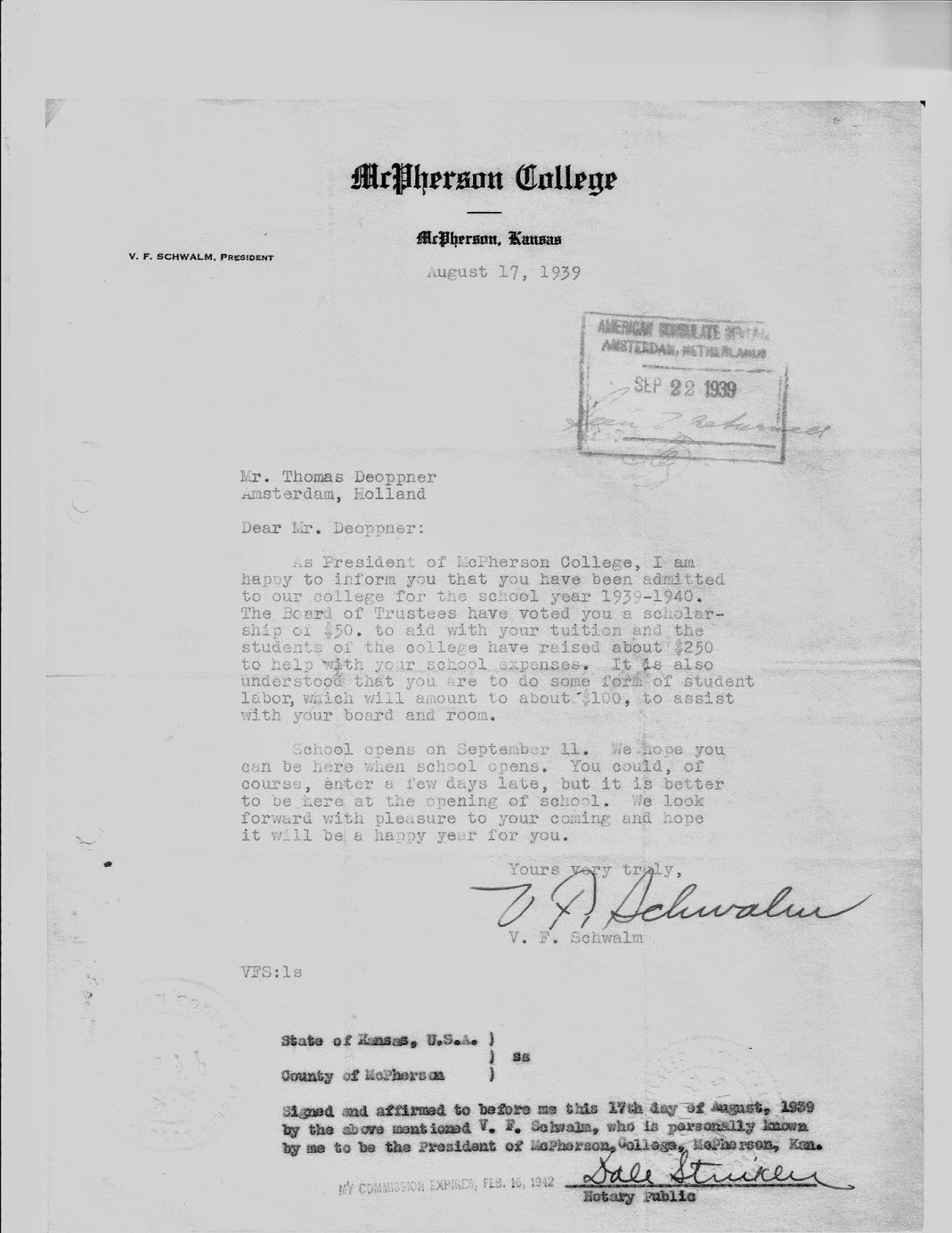 As President of McPherson College, I am happy to inform you that you have been admitted to our college for the school year 1939-1940. The Board of Trustees have voted you a scholarship of $50. to aid with your tuition and the students of the college have raised about $250 to help with your school expenses. It is also understood that you are to do some form of student labor, which will amount to about $100, to assist with your board and room.

School opens on September 11. We hope you can be here when school opens. You could, of course, enter a few days late, but it is better to be here at the opening of school. We look forward with pleasure to your coming and hope it will be a happy year for you. 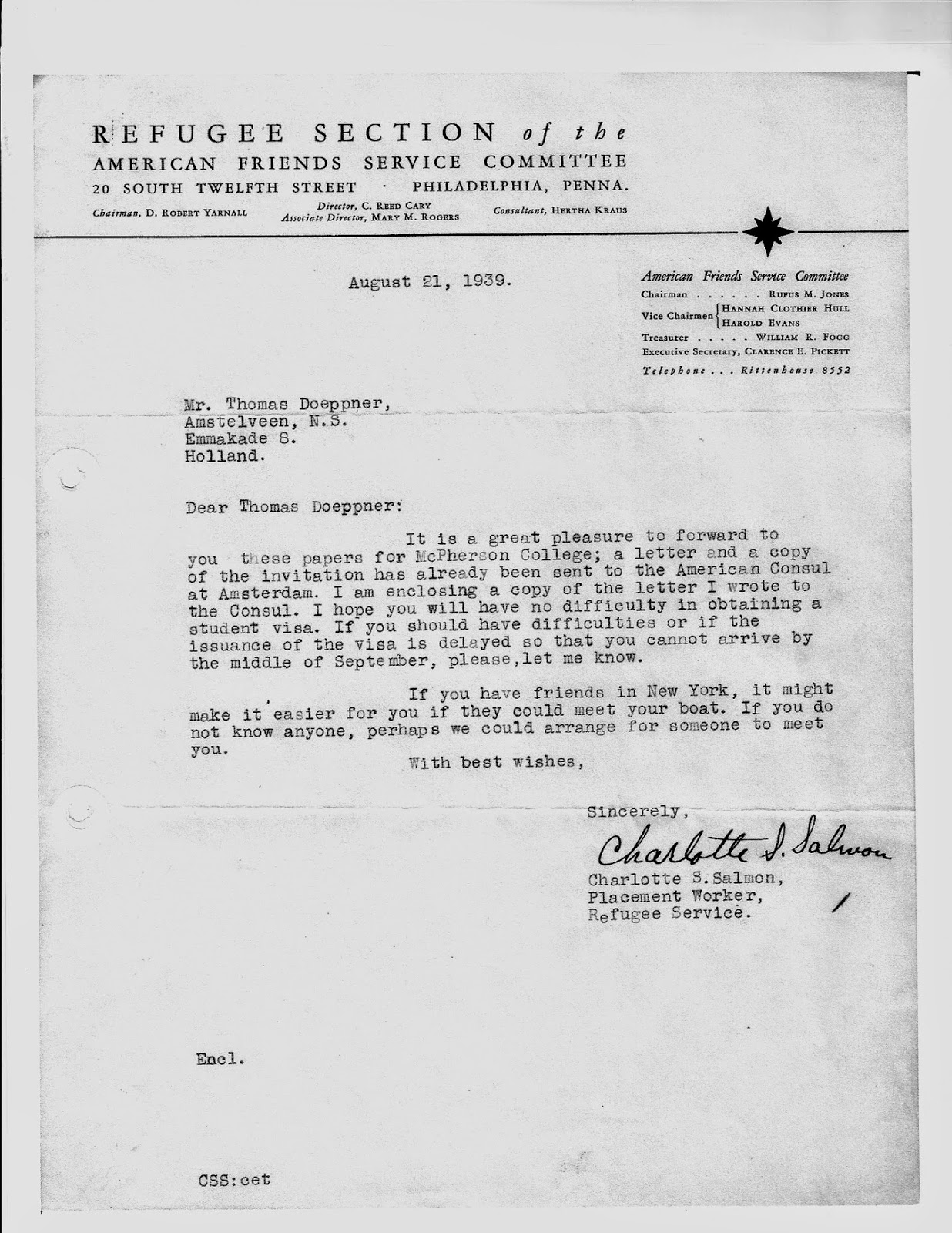 It is great pleasure to forward to you these papers for McPherson College: a letter and a copy of the invitation has already been sent to the Amsterdam Consul at Amsterdam. I am enclosing a copy of the letter I wrote to the Consul. I hope you will have no difficulty in obtaining a student visa. If you should have difficulties or if the issuance of the visa is delayed so that you cannot arrive by the middle of September, please, let me know.

If you have friends in New York, it might make it easier for you if they could meet your boat. If you do not know anyone, perhaps we could arrange for someone to meet you. 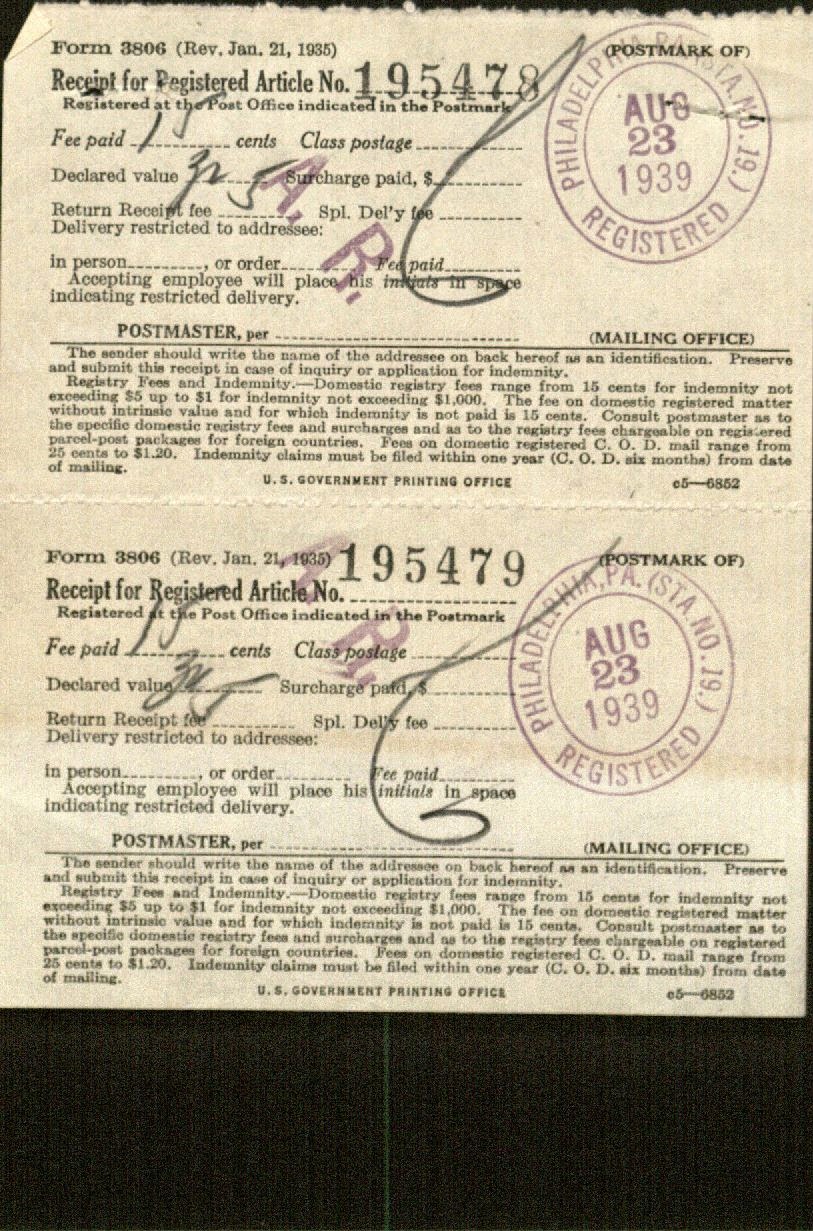 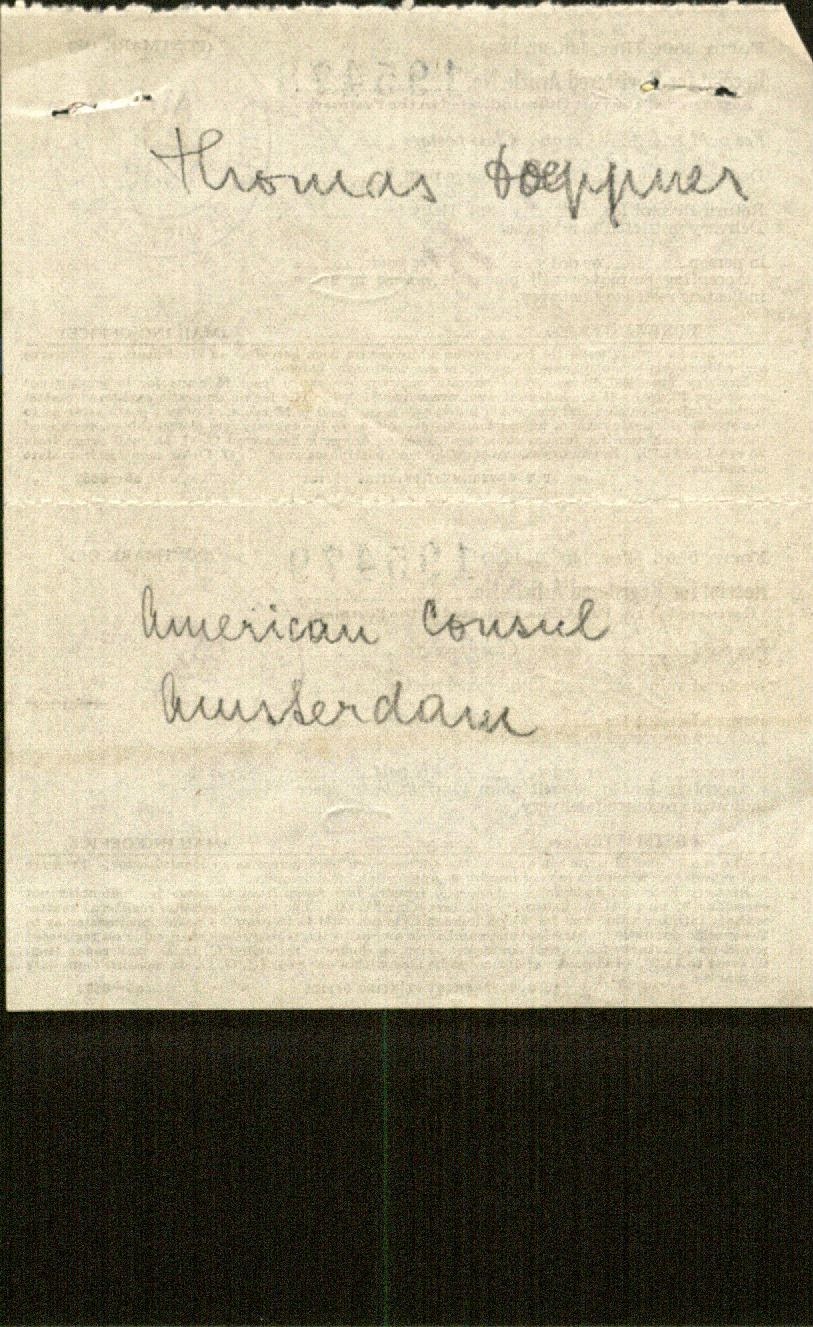 The President of McPherson College wrote a letter to my Opa to say: “Welcome to McPherson, Tom.” It’s officially official. All the notes are notarized, the letters sealed and registered, and the American Consul in Amsterdam have been notified. Opa has been welcomed to study in the United States of America.


I sat back and looked at all these documents, and I thought about Charlotte Salmon. I know that she knew the journey was not yet finished, but this is such a huge milestone- and few refugees even made it this far. I wonder what percentage made it to this point. In 1939, the borders were starting to close, and as I’ve discussed in this blog, people in Germany were finding less and less opportunity for escape. I hope that Charlotte let out a belly laugh and smiled in victory when she saw these letters from President Schwalm. Would she forward these to Tom Doeppner? YES!

At this juncture, I will take a huge breath of relief and thanks on behalf of Charlotte and her colleagues at the American Friends Service Committee (AFSC), and also for McPherson College. I visited McPherson college over the summer, and I discovered something about that place. This was not (and is not now) a school that had thousands of students and hundreds of small niche groups that could raise funds in an effort to help a refugee student. No, McPherson was (and is) a tiny, tight-knit college where it is likely that everyone knows each other by name, to include faculty and staff. Raising funds to bring this refugee student over to America could not have been someone’s small pet project, it absolutely had to involve the entire college and community to be successful. Now that I have seen the campus and met the folks and looked at their history, I have an even greater respect for how significant their commitment was to helping someone like my Opa. By the way, in case you’ve been saying it wrong- I was reminded (Jason more so) that there is “no fear in McPherson.” So you pronounce it “mc-fur-son.”

Our friends at McPherson sent their letters to Charlotte at AFSC so that she could forward them to Opa in Amsterdam.  I find it funny that no one seems to know Opa’s address. Perhaps they were afraid that he might be transient because of his refugee status? He stayed at that address from the time he permanently left Germany. Charlotte willingly forwarded this information and included her own letter to the American Consul at Amsterdam. ALL of this was sent by registered mail. 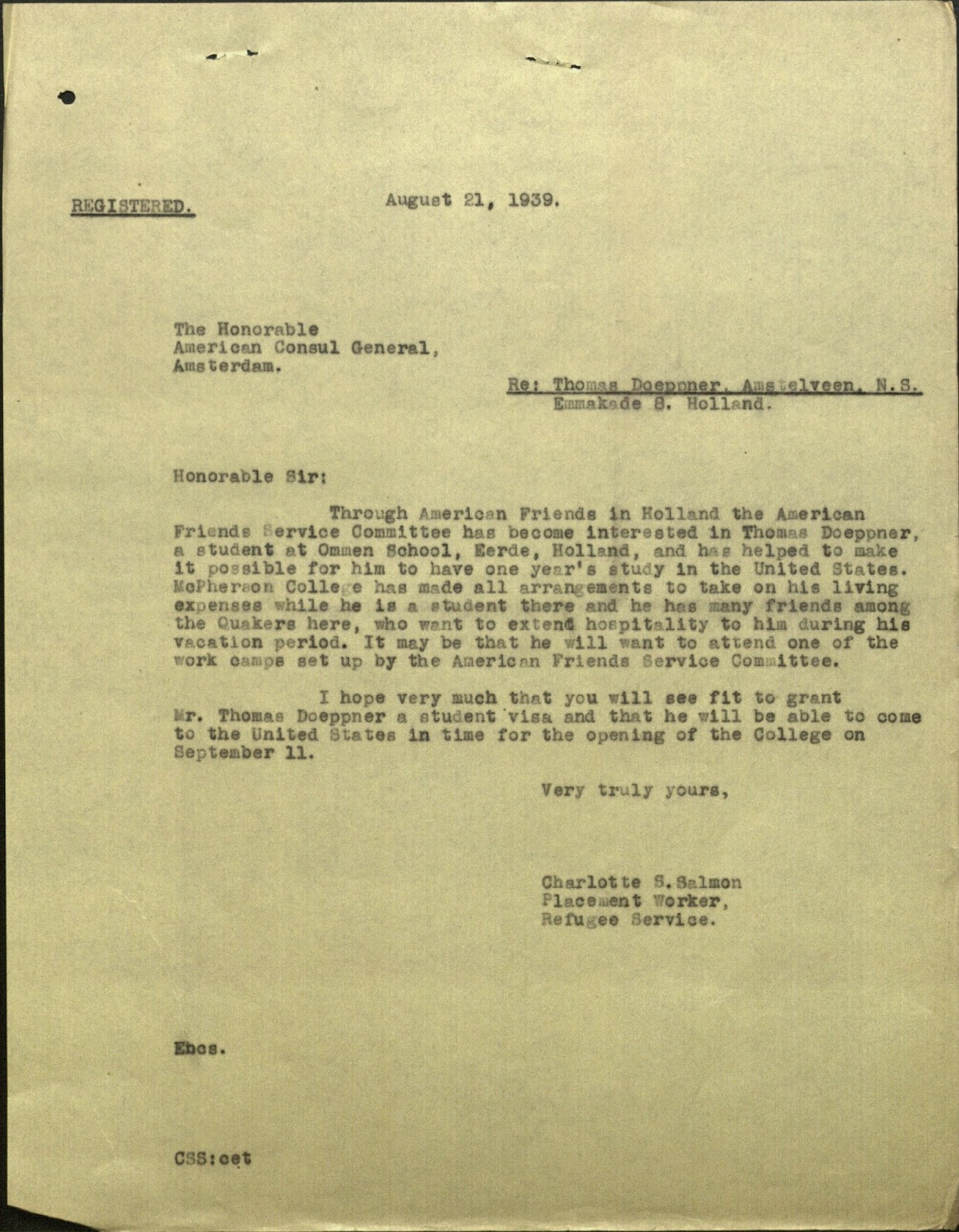 Through American Friends in Holland the American Friends Service Committee has become interested in Thomas Doeppner, a student at Ommen School, Erde, Holland, and has helped to make it possible for him to have one year's study in the United States. McPherson College has made all arrangements to take on his living expenses while he is a student there and he has many friends among the Quakers here, who want to extend hospitality to him during his vacation period. It may be that he will want to attend one of the work camps set up by the American Friends Service Committee.
I hope very much that you will see fit to grant Mr. Thomas Doeppner a student visa and that he will be able to come to the United States in time for the opening of the College on September 11.
Very truly yours,

Charlotte S. Salmon
Placement Worker,
Refugee Service.
I love Charlotte’s letter to the Consul. It’s a political genius. I bet the placement workers didn’t realize all the skills necessary to do their job… to include political perfection. Charlotte’s letter to the Consul sounds nothing like Opa is a refugee. To quickly glance at it, you would assume Opa was a promising student with a great number of friends waiting to greet him in the United States. Just for one year of study (the goal is to get there). The Quaker’s use of the word “Friend” comes in handy here, especially for someone who may not realize they call everyone in their scope a Friend. No where does she mention he is from Germany. No where does she mention he was dodging the draft into Hitler's army. She intentionally downplays any financial burden he might be, not only citing McPherson College as his guardians, but also the entire Quaker people who would welcome him with open arms should he need anything. I believe it, too. The best part- she calls his break time “vacation period” - like Opa is studying abroad for fun. I know that no one is buying it, but there are also a beautiful lack of red flags in this letter, and so the American Consul in Amsterdam should have much less to be worried about. 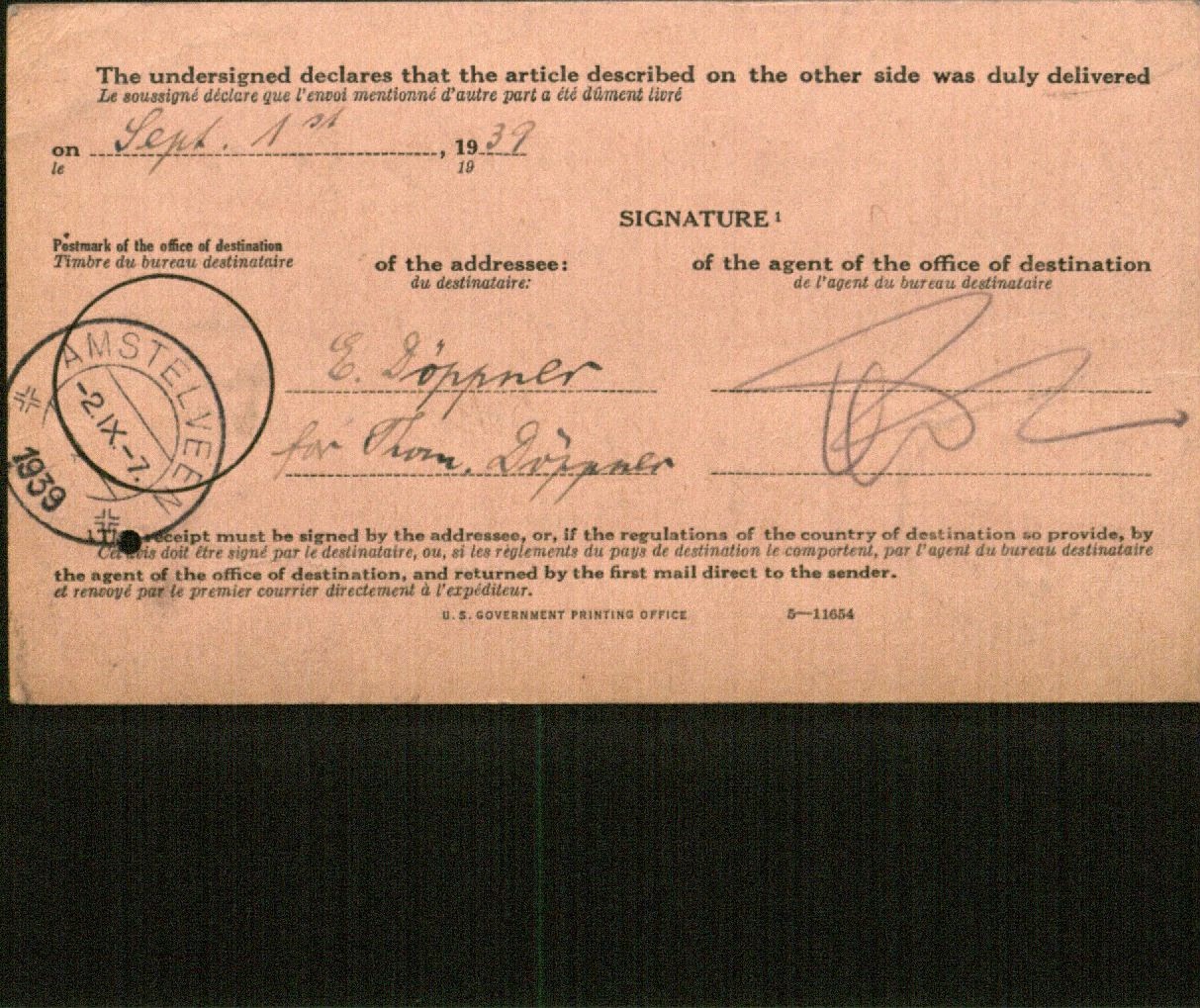 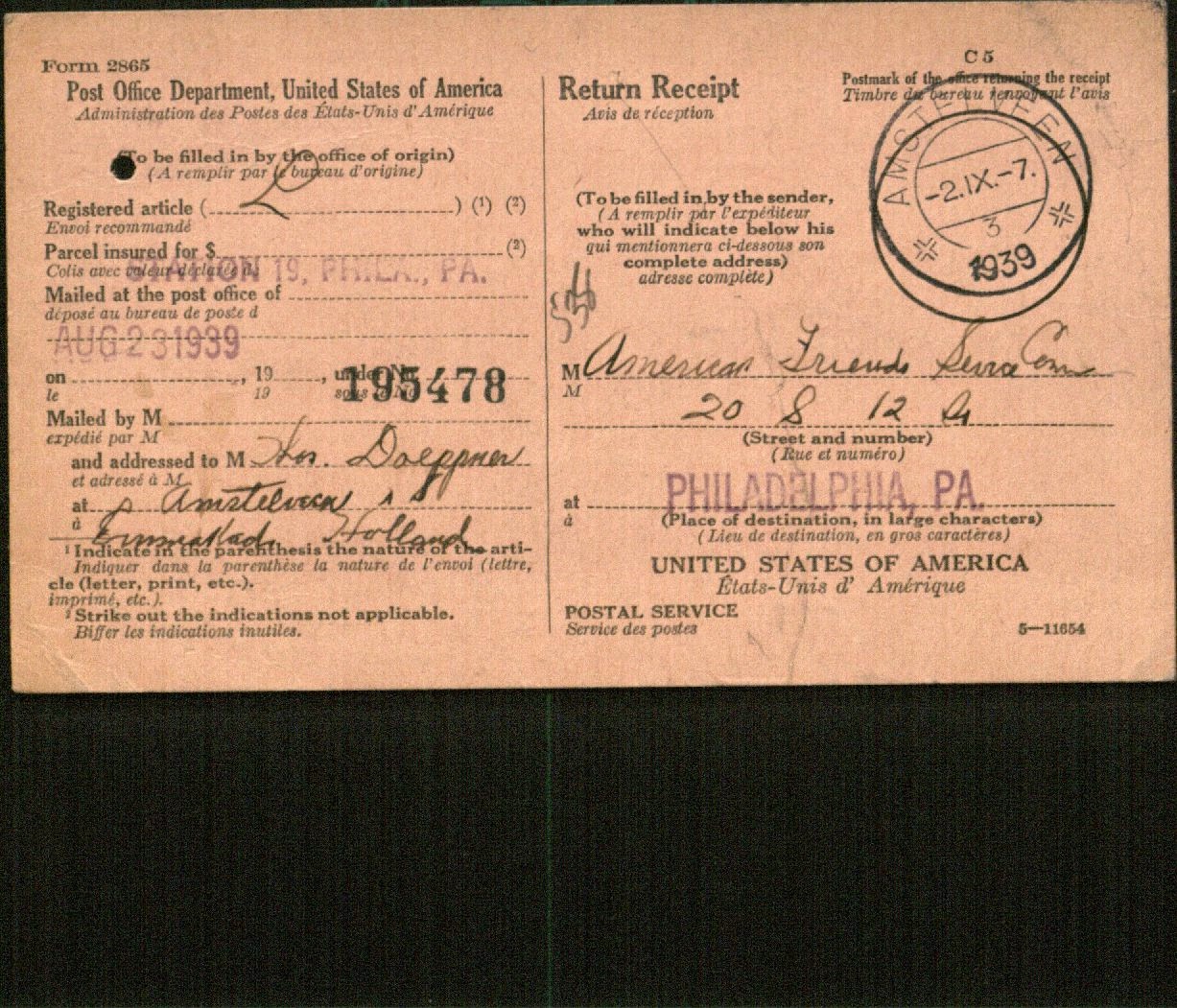 Now we wait and see. Will Opa get his student visa approved? Will he make it to school on time? Just a reminder: they want him to come to school by the start date which is September 11th. The date on the receipt of the letters in Amsterdam is September 1st. (By the way, did you notice who signed? E. Doeppner. I took a double-take before I realized that it was Emma Doeppner, Opa’s step-mother, not Ella Doeppner, his mother in Berlin who we have not heard in a while.) I’m going to go ahead and take a wild guess that Opa doesn’t make it by September 11th- because a boat trip across the Atlantic averages about 6 days now, and I assume it was longer in 1939 with the threat of war brewing in the seas. Opa probably isn’t waiting and seeing. He’s marching to the Consul as soon as he can!
Posted by Sarah Snow at Monday, September 29, 2014