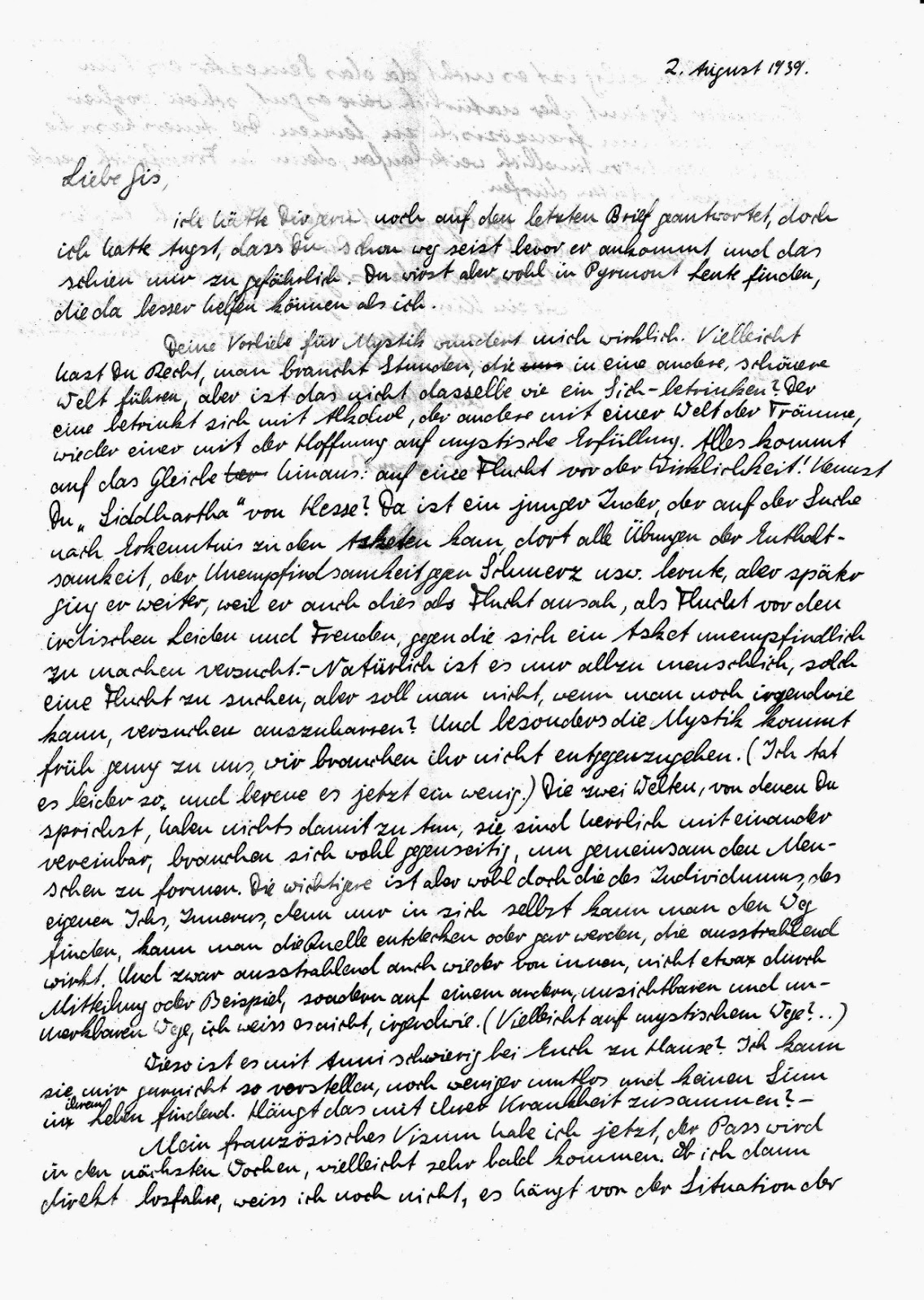 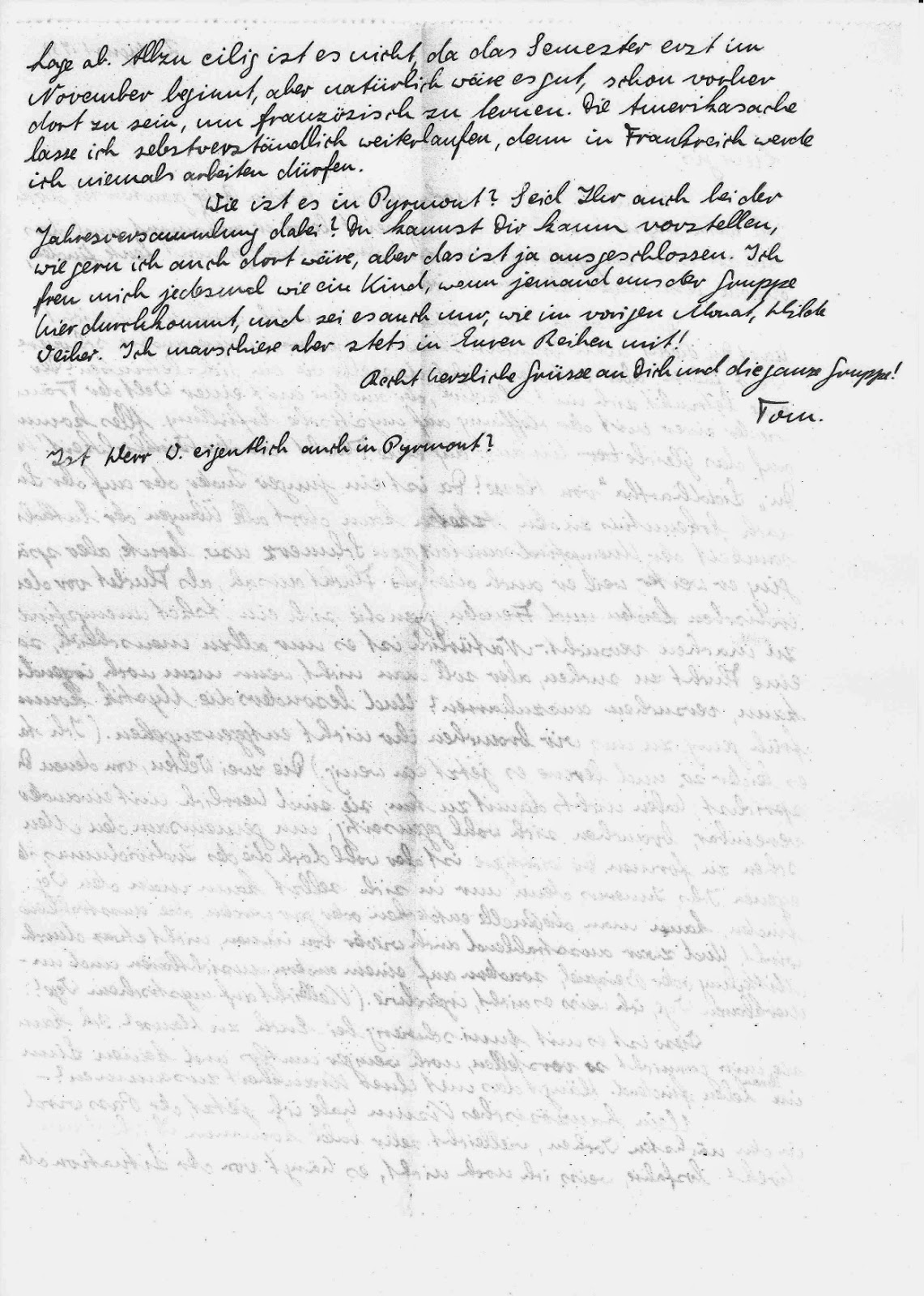 I would have loved to answer to your last letter, but I was afraid, that you might have left already, before it got there, and that seemed too dangerous to me. But you will meet people in Pyrmont, who can help better than I.

Your preference for Mysticism honestly surprises me. Perhaps you are correct, one needs hours (time) which will lead us into another beautiful world, but is that not the same as getting drunk? One gets drunk on alcohol, the other on worlds of dreams, the other of hope of mystical fulfillment. All of it amounts to the same: "escape from reality!" Do you know "SIDDHARTHA" by Hermann Hesse? He was a young Indian, who looking for knowledge comes to the Ascetics, learns all the exercises for abstinence, the insensitivity to pain, etc. but later moves on, because he saw this as an escape from earthly suffering and joy, to which an Ascetic tries to make himself unfeeling.  Naturally it is too human to try such an escape, but shouldn't one, if at all possible, try to bear it?

Especially the mystic comes to us early, we need not to go forward to it. (Sadly enough I did, and now regret it a bit!) The two worlds you are talking about have nothing to do with each other, they are beautifully connected with each other, need each other, to jointly form a person. However the most important is the individuality, the own self and beliefs, because only in one’s self can one find the way, can discover the source, or even become it, which can radiate from there. And again, can radiate from within, not by way of examples, or some information, but in an invisible and not noticeable way, I don't know, somehow. (Perhaps a mystic way?)

Why are things different at your house with Anni there? I cannot imagine her that way, even less, that she feels hopeless and cannot see a reason for living. Does that have something to do with her illness?

I now have my French Visa, the passport should arrive during the next week, maybe it will come soon. I don't know if I can leave right away, it depends on the situation here now. There is not too much of a hurry since the semester starts in November, but naturally it would be good to be there before, to learn French.  The America thing (plan) I will of course continue, because I will never be allowed to work in France.

How are things in Pyrmont? Are you part of the annual gathering? You can hardly imagine how I would love to be there, but that is absolutely impossible. I rejoice like a child whenever somebody from the group passes through here, even if it is only Hilde Weiher, last month. In my mind [heart] I am marching in your rows with you.

Heartfelt greeting to you and the group

This letter to Gisela is pretty quick after the last one. It seems Gisela has written something to Opa that he is hesitant to respond to if she’s not around to get the letter right away. I’m not sure if that’s about something as big as information getting into Nazi hands, or more on a small scale like information getting in Anni or other relative’s hands. Either way, whatever it is, it seems Gisela should be able to get some advice/help from the folks at Pyrmont. Pyrmont is the site of one of the Quaker retreat centers. The Quaker group visited often, and it is still there. In fact, today, Gisela’s parents and husband are buried at Pyrmont. It is a special place for the Berlin Quaker group.

So Opa and Gisela are still on the mysticism train. I love Opa’s drunk analogy. I also love that he pins down the biggest downfall of many of these movements: "escape from reality!" This he believes is ultimately foolish. Opa mentions yet another mystical book “Siddhartha” by Herman Hesse, which I am also reading (I’ll get those book reports to you soon!). Opa offers his own philosophy - that mysticism has its place as well as a firm grip on reality. He focuses in on the individual - and the self-discovery of someone who finds the way within themselves. I can’t help but notice that Opa’s reliance and focus on individuality comes in a time when he has had to be extremely reliant on himself through some pretty scary and trying times. He left Germany by himself, only to come close to getting caught. He was smuggled illegally out - having very little communication with people until he finally arrived in Amsterdam. (Read here for my account of Opa’s journey out of Germany.) And yet, the irony is that even though he has had to rely on himself and his own strength for much, he has also been relying on his friends, family, and the kindness of strangers.

I wonder if Opa could see all that we dug up in documents (some of these files he never saw)- if he would have a different perspective. His entire life at the time of this letter is surrounded by a loose community of people working very hard to help him. When he feels the most isolated, lonely, and independent- he is the most reliant on other people for help - and they are very present- if not close by.

I had never heard of Anni having issues with depression or hopelessness during this time, although I don’t doubt it. The Halle family were subject to continual visits from officials to ask questions and intimidate them. The Halle’s were right on the border of being acceptable to the Nazis. They worked tirelessly to counteract the work of the Nazis, but they did so cleverly, in a way that wasn’t technically illegal (to my knowledge, although I’m sure they broke the rules plenty- just not obviously). They had the Quaker name to protect them- the Nazis remembered the Quakers feeding everyone after the first world war (see here where I mention that). They had the famous aviator uncle Otto Lilienthal to name-drop should they need to. So basically the Halle’s were on the Nazis’ list of people to pester and check in on. That much surveillance can make a teenager/young adult go insane. Especially when you have things to be worried that the wrong people will find. (See our spotlight on the Halle family here, we will likely add more as we learn more).

I never knew Opa officially had his French Visa, and he was due to receive his passport in a week! He was planning to leave for France soon! We know as readers that he has been accepted to McPherson College on a scholarship, but he doesn’t know yet. Charlotte is only now receiving the news. He sounds like he is planning on studying in France like his sister Patti. I can’t believe how simultaneous these two very different tracks are unfolding! What if Opa had ended up in France?! What an incredibly different story that would have been!

Opa wishes that he could be back with his Quaker youth group, enjoying life with his friends on a retreat in Pyrmont. Hitler has taken absolutely everything dear away from him. Opa’s entire life has been shifted by Hitler’s existence.

I laughed a little when Opa talked about being so glad when someone came through Amsterdam, even if it is only Hilde. HA! Poor Hilde- chopped liver! He mentions Mr. W- that is Mr. Wohlrabe- the adult leader of their Quaker youth group.

Soon Opa, who is still a bit forlorn, will learn that the “American thing” is a very real possibility. Then everything will change. Again.
Posted by Sarah Snow at Thursday, June 12, 2014