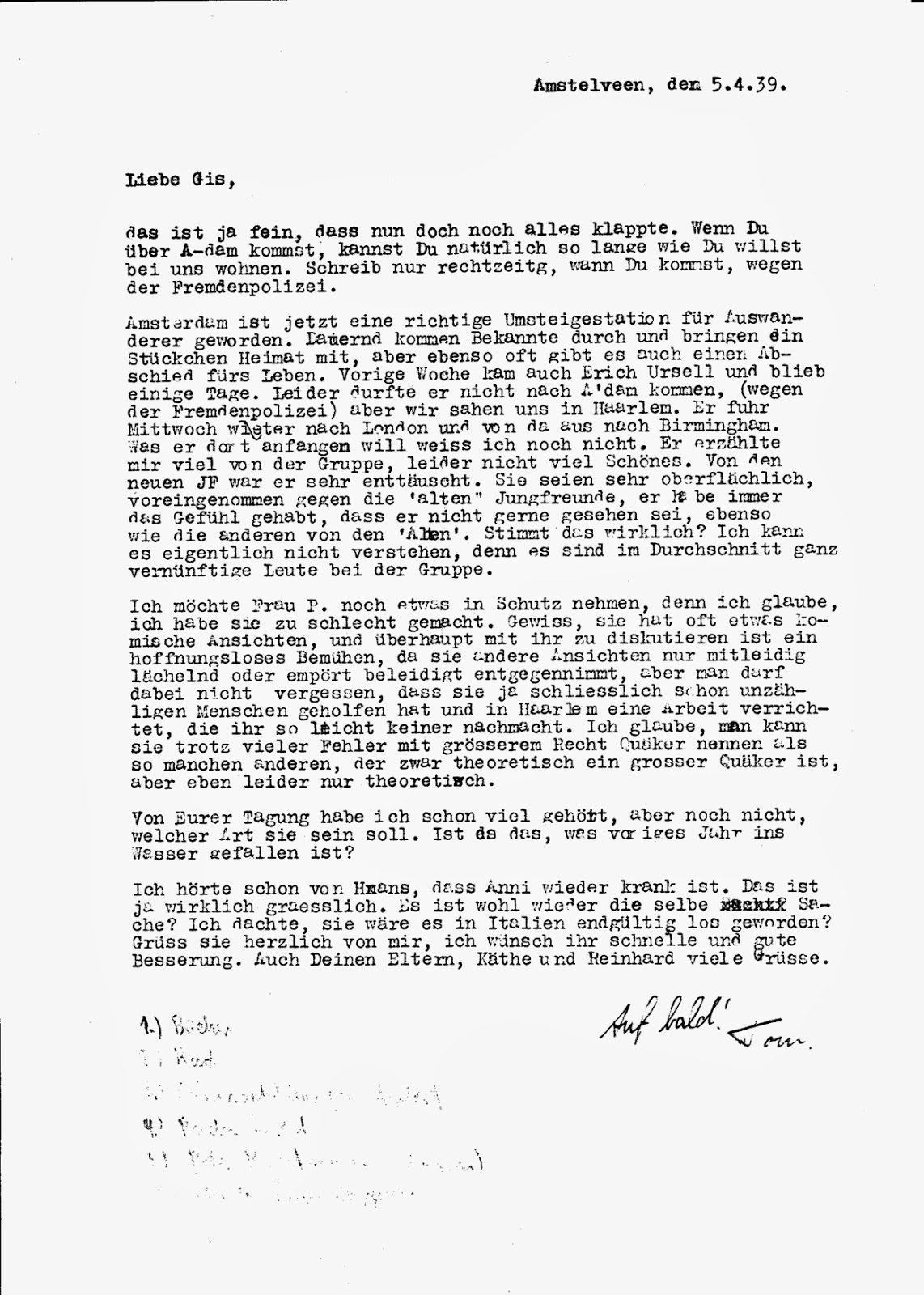 Amstelveen, April  5th, 1939
Dear Gis,
It is great that things will work out. When you pass through Amsterdam, you naturally can stay with us as long as you want. Do write soon, when you will come, because of the Foreign police. (I do not know  what Thomas means by FOREIGN POLICE)

Amsterdam has become a real transfer place for immigrants. Often acquaintances pass through and bring a piece of home, but just as often it is a goodbye forever (for life). Last week Erich Ursell came by and stayed a few days. Unfortunately he was not permitted to come to Amsterdam (because of the foreign police there) but we met up in Haarlem. On Wednesday he left for London and from there to Birmingham. What he will do there, I do not know yet. He told me much about the Group, but sadly nothing good (nothing nice). He was very disappointed in the new J.F.(Junge Freunde—Young Friends). They are so superficial, prejudice against the old Young Friends, he always had the feeling not to be wanted, just as others of the old group. Is that really true? I really cannot understand it, because on the average there are sensible (rational) people in the group.

I want to say something in behalf of Mrs. P. (Mrs. Pollatz), because I believe I denigrated her a bit. Certainly, she sometimes has funny (strange) opinions, and it is a hopeless effort to have a discussion with her because she accepts other ideas only with  smiling pity, or as indignant insult. But one should not forget, that she has helped innumerable people, and does work in Haarlem nobody else could easily do. I believe that one can rightfully call her a real Quaker, in spite of her many faults, more than others, who are great Quakers in theory, but sadly enough in theory only.

I have heard much about your conference, but not what kind it will be. Is it the kind that fell through last year? (in German it actually says “fell into the water”)

From Hans I heard that Anni is ill again. That is really dreadful. It must be the same problem again? I thought she got rid of it for good when she was in Italy. Give her my best wishes and a fast and good recovery. Also many greetings to your parents, Kaethe and Reinhard.

Opa writes just to Gis this time, happy to host her on her way to England. He asks her to write soon about the timing of her visit because of the Foreign Police. The translator isn’t sure what Opa means by Foreign Police. I’m not sure either, but I remember Gisela talking about the police raids and drills. It was my understanding that some of this was akin to your average fire drill- except a little more intense. Perhaps the police were there searching out wanted people? I’m going to need to find out more about this. Either way, the presence of the foreign police is certainly a deterrent for some folks to visit and be out in public. We know from our interview with Gisela that she does visit Opa in Amsterdam on her way to England. This is the visit when they kiss!  But don’t worry- I’ll tell you that story when the time comes.

Opa got to see a decent amount of people as they passed through to other countries. He describes Amsterdam as “a real transfer place for immigrants.” It is sad that there is an understanding that everyone is going away, probably forever: “Often acquaintances pass through and bring a piece of home, but just as often it is a goodbye forever.”  This is especially sad considering how tight knit the Quaker group was.

Opa details a recent visit from a fellow Quaker who had bad news about the new youth group.
Basically, the new young group is a bunch of superficial and judgmental folks. There is some animosity between the old and new group. The old group is feeling unwanted by the younger folks. I wonder what dynamic is happening here. The characters I have met from the old group are great people, but strong personalities. I wonder if that group’s unique bond and personalities are too much for the newer folks. Ah, Quaker drama. Once again, I see signs of the group members mourning the loss of their safe haven, the people and place that they could call home. Kristallnacht and the increasing power of the Nazis has caused a splintering of that sanctuary.

I really appreciate and enjoy Opa’s defense of Mrs. Pollatz. He has talked about her in a way that makes her sound kind of crazy. Opa admits that she has strange opinions and is difficult to have a discussion with, but he focuses in on her actions.  He appreciates her work ...compared to those who say one thing and do something else. That’s pretty powerful if you think about it. Do we focus our energy too much on whether someone is saying the right thing? Do we forget to look at the actions of people and not just the words. Words are important, but if you come across a Mrs. Pollatz ...who do you want by your side, the person who says all the right things, but doesn’t do anything, or a Mrs. Pollatz who is stubborn and challenging in word, but actively works to help people? Opa calls her a real Quaker, even with his critiques in mind.

I’ve noticed that Opa has been insightful about the characters in his life… He has the ability to see the good in people and situations, but not in a pollyanna way. He weighs the frustration of a discussion with someone like Mrs. Pollatz, and sees her good work as a reason to keep investing in her. He was close friends with Anni who is a very strong personality, but sees the good quality in her strength and intellect. Even when critiquing the report, he didn’t say it stunk, but that what occurred was more interesting than the Halle sisters made it out to be. Opa has a funny combination of optimism and realism in the way that he looks at life and people. It’s honest, insightful, and accepting. I don’t know that I ever really noticed this about Opa before.

I just noticed something else- we have heard about the folks of this time writing to each other in a sort of code to get around the Nazi censors. I haven't paid much attention, to be honest, because I sort of forgot about it. But I wonder if illnesses are always truly "illnesses" as it seems odd that Anni would be "cured" in Italy. I wonder if that is a reference to something. Also- he tells Gisela hello to her parents, and then names them by first name. That also struck me as a bit odd. I may be reading into things- but as he calls Mrs. Pollatz by her formal name, I think it would be strange for him to name Gisela's parents by their first names, and also just to name them at all. Surely Gisela would know who he is talking about when he says "parents." These are the little riddles I may never solve.