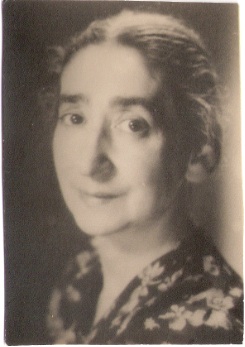 Today I’m going to tell you about Ella. Ella is my great-grandmother, Opa’s mother. She was born in 1888, and had one sister, Martha, and two brothers, Kurt and Walter. I have always held an image of her in my mind as a quiet, timid soul. I have it both right and wrong.  In his memoirs, Opa describes his mother as shy and quiet. (All italicized quotes in this blog post are from Opa’s memoirs “From Nazi Germany to a Career in Freedom.”)

I know very little about my mother’s childhood and youth, because my mother was a basically shy person who didn’t like to talk about herself... My mother was a very quiet and studious person. She was born in the small town of Ottensen in the northwestern part of Germany, and educated in a fashionable Jewish school for girls. She became a school teacher, teaching primary languages (French and English, both of which she learned to speak and write fluently and correctly).

Helene, Ella’s granddaughter, reminisced with my Dad during my Grandmother’s funeral last year. He jotted down some notes about what she said and sent it to my sisters and I, giving us some more insight into our German roots, especially Ella. Most of the conversation was around Ella and Patti. Patti was Helene’s mother, Opa’s sister. Helene remembered that Ella taught world religion in the equivalent of high school for the Germans. I wonder if she taught that in addition to the language classes, or if Opa and Helene just have different memories of what she taught. I wonder if she taught religion in the schools and tutored in the languages. I wonder what that was like, being a Jewish woman teaching religion in a time of rising anti-semitism.

The words that I had often used to describe Ella in my mind are shy, timid. I thought of Ella as sort of a victim- of war, divorce, and prejudice. Opa described himself as a bit of a Mama’s boy, and now that I’ve learned more about Ella, I think Opa was very much like his mother: infinitely determined. As I allow Opa’s memories of his mother continue to massage into my mind, I think of how strong she was. I am amazed by Ella. She does not play the victim. She is ridiculously strong. She was sort of cast aside by her husband, August for the more fun-loving Emma. She was the primary care-giver for her children while holding down multiple teaching jobs to make up for the loss in income in the divorce.

Another person who chimed in with memories of Ella is Renate. Renate is Ella’s niece, the daughter of Ella’s younger brother Kurt. Renate remembers Ella fondly as the only aunt who knew that she belonged to her father. Renate’s father was Ella’s brother, and therefore Jewish, and Renate’s mother was Aryan. It was a crime for Jews and Aryans to marry (although I am confused by this since Ella married August- an Aryan. I’m wondering if the law was not around when Ella and August were married).

Renate says she has only vague memories of Ella (she was young) but they are full of “very loving, tender, and warm feelings.” Apparently Ella was Renate’s father’s favorite sister as she would share her chocolate with him but their older sister Martha would not. Renate tells a funny story of Martha’s habit of hiding her chocolate in her mattress and then forgetting about it and finding the chocolate smeared traces.

I just keep getting more and more amazed by Ella. She seems like the center of her family. She shares, and takes care of her siblings at a young age. She instills a passion for education in her children, which continued into my generation, Opa and Grandmother paid for my college education. Ella was the aunt who knew the secrets and could be trusted to be loving and kind. Ella sounds like a matriarch. She should have had hordes of family and students, but rather lost them all in the Nazi regime. In another world, she would have grown old and grandchildren and students would be milling around within her strong and loving reach. In that other world I would not exist, but I wish for Ella a better story.

She lived a genuinely hard life. Sure, there was goodness, she had good friends, children, and a talent for teaching. But she lost so much. Her life was one great loss after another, crashing in with the predictability of a wave crashing to shore.

She lost her older brother Walter in the first World War. I have a few clues about the importance of Walter to Ella. Opa’s middle name was Walter. Ella followed the tradition of Jahrzeit to honor the day of Walter’s death.


My mother was not basically a religious person, but there are two Jewish customs which she maintained: The first is that she would not do any sewing on the Sabbath (for which we usually kidded her), and the second is that she always lit a candle on the anniversary of the day her brother Walter died (a Jewish tradition called “Jahrzeit”).

From what I learned about the tradition of Jahrzeit in the Jewish faith, it was typically reserved for the honoring of parents (more commonly fathers) and important teachers.  If any of you have experience with this tradition, please comment and let me know.  I’d love some insight.  I’ve also seen an alternative spelling: Yahrzeit.  Ella observed this particular ritual in a life lightly sprinkled with religious practice.  Maybe Walter was more like a dad than a brother, or maybe he taught her great things. I don't know, but I do know that she chose honoring him as part of her spiritual life and it made an impact great enough that my Opa remembered it years later.

Ella’s next loss was the loss of her mother, who she had been caring for through a long illness. All I know about this is that she suffered through a deep depression as a result. I suffered through depression brought on by grief after my Memaush died (my Mom’s mom). I don’t want to conceive of what it is to lose a mother. A good friend of mine lost her mother unexpectedly last summer. She was pregnant and had her baby this fall. All I could think about is how much she must want her mother. There is something very special about the bond between a girl and her mother. To lose a mother is to lose a part of your foundation.

After this loss, and maybe because of her depression, Ella’s next loss is the loss of her marriage. From Opa’s perspective, Ella was surprised and did not wish to divorce August. However, Ella granted August the divorce and maintained care of her children, even taking extra work when the promised alimony did not come in.

Things didn’t work out financially; my father apparently did not live up to providing all the alimony the divorce agreement had specified, so my mother had to go back to work again. She took a job teaching German at the Russian embassy in Berlin, riding the streetcar to work five times a week; most of the time, she didn't return home until about six p.m. She was away so much that I remember as a little boy hiding under the table when she was teaching one of her students at home, just to be close to her.

I couldn’t help but see a different side of August in this account- thinking him to be kind of a dead-beat dad. Ella could have easily spoken ill of him, kept his children away or any other typical response. I sense from Opa’s close relationship with August and fond memories of him, that Ella remained positive or at least quiet on the matter. That would be so hard. She showed amazing strength by picking up the pieces and moving forward. Where would Opa have gone if she had allowed a barrier between father and son? August was the main instrument in helping Opa emigrate. Would he have been forced to fight for the Nazi’s? Escaped without success? Ella kept plowing on.

Another crushing loss would be the more abstract loss of security when Hitler rose to power. I don’t know that Ella ever felt the ignorance of blissful security, but Hitler’s reign certainly took away any hopes for safety. As the Nazi’s gained power, Ella’s family, both immediate and extended, began to disperse. Ella lost her family members to distance, separated by oceans of worry. She lost many of her family to crushing prejudice- her extended family perishing in the hands of hate without any power to stop it. I don’t know how she did it.

I want to give up on her behalf. Beat my chest and yell “STOP!!!  NO!!! UNFAIR!” Did she ever do that? She was strong, but for what? A short, hard life? No one lights a candle for her, and they should. Yet, my little niece is named Ella after her. My family is here because of her. I struggle to write this because the emotions I have are anger, sadness, despair at the human condition. She inspires me because she lived in a truly horrible time and place and made goodness out of madness. She was a good mother, one that Opa longed to be near, even if at her feet. I mourn for her life, her being forced to live in fear, loss, and worry. But she did endure, even if I think she should have given up. She loved.  Beyond everything she never lost her ability to fiercely love, and perhaps that is the reason she lived.
Posted by Sarah Snow at Friday, November 23, 2012