Grandmother's Ancestry (in a screenshot)

I want to trace her parents just a bit to give you a glimpse of where they came from. Opa's family ancestry is a bit fuzzy in places, but Grandmother's roots we know a little better.

So let's start with the Sloan side, her Dad's family.

Marjorie's paternal Grandfather was named George Washington Sloan. If that's not an American-sounding name, I don't know what is. I found a document that is a seven page biographical summary of George W. Sloan, written by his grandson, Ray Sloan (my Dad's uncle). It's a fascinating article, so I'm going to sum up some of the fun parts for you:


George W. Sloan was born in McDonough County, Illinois, October 5, 1850. By the time he had reached the age of 12 both parents had died leaving George with two older brothers, one younger brother and a sister to fend for themselves. His oldest brother, John, joined the Union Army during the Civil War and George and his two other brothers and sister were taken into the home of a friend of the family.

I want to interject how amazing it is that George W Sloan practically raised himself from age 12.


After the close of war his brother John came to Kansas to homestead and was later joined by the rest of the siblings.

George migrated to Wayne County, Iowa in 1868 and in 1877 married Hannah Jane McCullough. In 1882 George and Hannah, with their baby boy Will (This is Grandmother's Dad), moved to Seward County, Nebraska and in April, 1886, at the recommendation of his brothers, he moved his family which then consisted of Will (W.J.), Ted (E.R.) and the baby Nellie (Clark) to Sheridan County, Kansas and took up a homestead in Section 31, Township 6, Range 29, four miles southwest of what later was to become Selden, Kansas. They made their journeys from Iowa to Nebraska and from Nebraska to Kansas in what was a "Prairie schooner" or covered wagon which was the common conveyance used at that time in moving a family for any distance.

The prairie schooner was much different than the conestoga in that it was lighter and more adapted to the use of the prairie people. It was an ordinary farm wagon or "lumber wagon" with a grain box that sat between stanchions between the wheels which permitted the box to be removed without any great difficulty from the "running gears" or from the wheels in order that the running gear could be adapted to a hay wagon or some other type of conveyance.... Horseshoe shaped bows are attached to both sides upon which were fastened white canvas which could be closed in front and back. The necessary tools needed at that time such as a breaking plow to open up the sod for cultivation or to provide sod for their homes and some sort of planter could be secured to the sides of the wagon in traveling. The only springs available to soften the ride was a spring seat which was perched atop of the sideboards. This was of some help in absorbing the jolts and bumps which were persistent and sometimes very pronounced in crossing the prairie. They led two cows, which had recently freshened, behind the wagon which were milked night and morning to provide milk for the children and for the cooking generally.


Hannah loved to relive their experiences and one of the experiences from which she drew much satisfaction in describing was that after the milk that was not used had been permitted to set so that the cream rose to the top, they would skim the cream off and put it in a separate container and the action of the wagon in bumping and jarring and swaying along the road would churn their butter for them.


(This next story comes after they've built a one room "soddy")

I got this definition from Wikipedia: The sod house or "soddy" was a successor to the log cabin during frontier settlement of Canada and the United States. The prairie lacked standard building materials such as wood or stone; however, sod from thickly-rooted prairie grass was abundant.

One night a wind and hail storm struck which tore away the canvas cover Hannah held a pillow over the baby to protect her from the hail stones....

George was a very energetic man; deeply religious; interested in politics and in any enterprise that he felt was for the good of the community.

In 1888 he helped organize the Selden Methodist Church which actually held its meetings in a soddy three or four miles or farther West of Selden and he taught a Sunday school class there for many years. 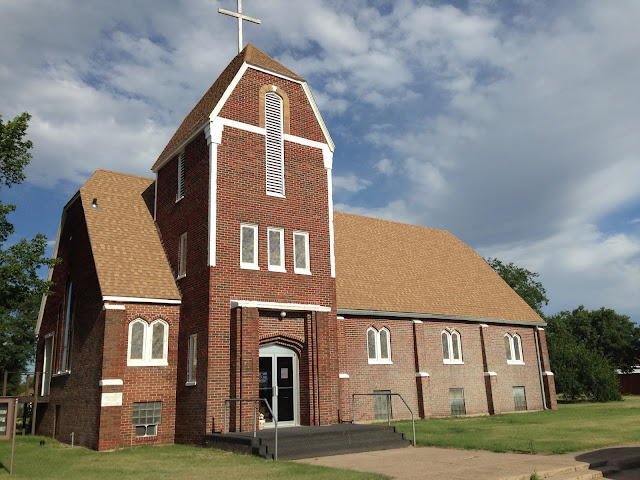 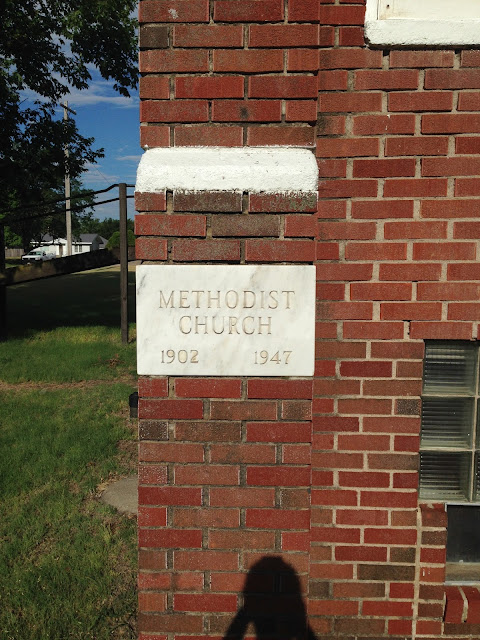 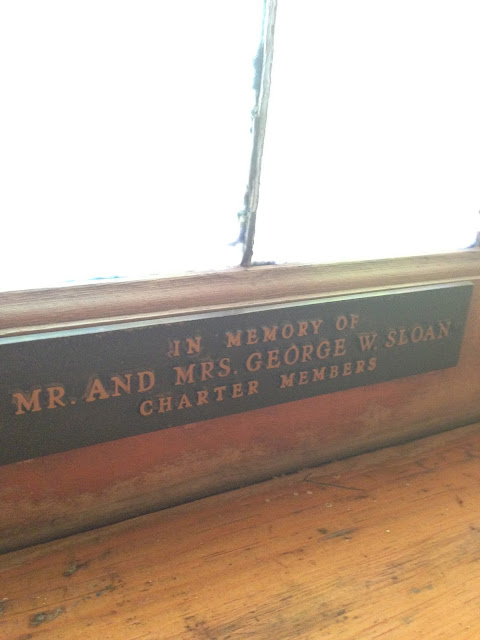 Inside the church, under a window.

He served on the School Board of the school district in which he lived for many years.


In 1889 he was elected County Commissioner from the third commissioner district and served as such for six years. On one occasion while he was at a commissioner meeting at Hoxie, a blizzard of unexpected force struck. At that time there were only Will and Ted at home, ages about 13 and 10, to look after the livestock. Fearful that he could not get home through the drifts with a horse and buggy he rented a saddle horse from the livery stable in Hoxie and hurried home as soon as the storm had abated. The two boys had managed to get the livestock in the sheds and windbreaks before the fury of the storm hit and the family were all safe and sound. The horse that George rode home was exhausted, and, not having any other available grain, they fed the horse some of the corn meal which was a part of their food supply to help restore the horse's strength.
...
By 1896 the family had grown to four boys and a girl and another child expected. This was Farris (H. F.) who was their last child. The original soddy had become much too small so George built a six room soddy.
...
He had been successful in his farming operations and had enlarged his farm to six quarter sections. In 1905, he moved to Selden, turning the farming over to his sons, where he engaged in animal husbandry, dealt in real estate and operated one of the first elevators in Selden. He also served as mayor of Selden for 2 terms. Later he was elected Justice of the Peace of Sheridan Township which office in those days handled practically all of the misdemeanor cases and small civil actions in the Township and in Selden.

He affectionately referred to his wife, Hannah, as "Hant" and they were affectionately referred to by their friends as Uncle George and Aunt Hant.
In the summer of 1915 George and Hannah attended the San Diego Exposition but shortened their trip due to "stomach trouble" which he was beginning to experience. After their arrival at home his stomach trouble increased and they went to Excelsior Springs, Missouri with the hope that drinking the warm mineral water and taking the "treatment" might be a cure.
A cure was not to be and he died in his home at Selden, surrounded by his family, on June 19, 1916, at the age of 65.

There was a saying among his friends that the "Sloans and Russian thistles were about to take Sheridan County" but all of his descendants except two grandchildren and one great-grandchild have left  Sheridan County.

I know this was mostly about George Washington Sloan, but you got a good picture of Grandmother's Dad's side of the family settling in and around Selden, homesteading and setting up farms and other trades.

Homesteading. Let me give you a quick rundown of what that is: the Homestead Act, signed in 1862 by Abraham Lincoln, encouraged folks to migrate westward and settle in the plains to farm the land. The price was right, and the incentive successful. Here is a link about it, and it won't take much to learn more if you are interested!
Posted by Sarah Snow at Tuesday, June 06, 2017 No comments: